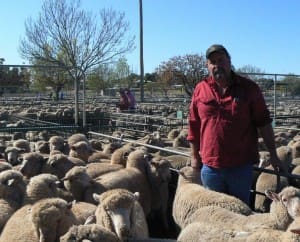 EXTRA heavy old lamb prices slumped by up to $27 at the Wagga Wagga saleyards on Thursday as buyers increasingly switch over to new season drafts and exporter demand fluctuates.

Quality light weight new season lambs, 12.1-18kg cwt, fared best in New South Wales and Victorian saleyards, selling up to 664c/kg at Wagga and to 617c/kg at Horsham. But trade and export weight young lamb rates did not go above 590c/kg in the east, only hitting 600c/kg at Katanning in Western Australia.

In New South Wales at the Central Tablelands Livestock Exchange at Carcoar, the agents yarded 2800 lambs, 650 fewer than last week, and 1800 sheep, 600 more.

It was a mostly plain quality yarding of sheep, with restockers and fatteners operating on most of the yarding. The few prime conditioned ewes and wethers sold $8-$14 cheaper at $80-$100 for crossbred ewes and to $98 for Merino wethers. Wethers sold to restockers at $30-$72.

Old trade lamb quality was plainer, with longer wool lambs again this week discounted. The better finished lambs, 21-24kg, sold from $107-$134, with heavy trade lambs averaging 499c/kg. There was a mixed selection of heavy and extra heavy lambs offered and they sold to limited competition, falling $17-$27. The best old heavy lambs reached a top price of $149 to average 470c/kg.

Sheep quality very good, with plenty of weight. A fair percentage of sheep were medium and heavy weight shorn Merino wethers and ewes. Merino trade sheep eased $5 to 341c/kg cwt. Heavy ewes sold up to $13 cheaper at $88-$110.20, averaging 310-350c/kg. Merino wethers were well-supplied and the heavier pens made $91-$102. Merino ewes in full wool with a $35 skin were keenly contested by restockers and the better drafts made $98-$119.

The NLRS said the young lamb yarding increased to 7500, with most the usual buyers operating.

Competition was not as strong, with lambs generally selling $10-$12 easier and lighter lambs $4-$5 easier. Trade weight and heavy lambs were in reasonable numbers and quality was average with the better presented lambs meeting keener competition to be least affected.

The NLRS said lamb quality was mostly plain to average. The yarding included the final drafts of old lambs and two pens of new season lambs. Only a core group of buyers attended.

The sheep yarding included some quality pens of heavy crossbred ewes and medium Merino wethers. Light weight sheep prices were also unchanged, but medium mutton eased slightly, mostly from $2-$3 and up to $5, and heavier sheep stayed firm. There was some restocker activity, mainly for the Merino wethers. 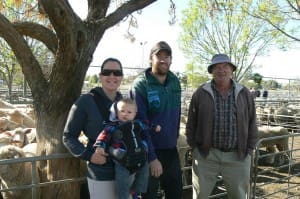 Underbool producer Alan Stone, far right, sold crossbred suckers for $136 at Ouyen yesterday. He is with Sara, Dan and Archie Pryse from Torrita.

Following market trends, prices for all weights and grades of heavy and trade lambs were $5-$10 down on the last sale two weeks ago.

The NLRS said it was a mixed quality yarding. New season lamb quality was mixed, with the best making $127. All the usual buyers attended.

In Queensland at the Warwick saleyards on Wednesday, the agents yarded 1804 lambs and hoggets, and 877 sheep.

The top-priced lambs in the sale made $139 for Whetstone Organics of Inglewood. The Warwick Selling Agents said the market was cheaper for all descriptions, in line with southern markets.