Shearing Sports New Zealand chairman and former multiple world, Golden Shears and New Zealand champion Sir David Fagan, was unable to be present at Waihi-Pukawa Station near Turangi, but felt the vibes from 140 kilometres away.

“There are some great things happening for shearing at the moment.

“This takes it to another level,” he said.

Particularly stunning was the effort of Gore shearer Megan Whitehead, who headed the individual tallies with 608, at about 53.3 seconds a lamb, caught, shorn and dispatched. 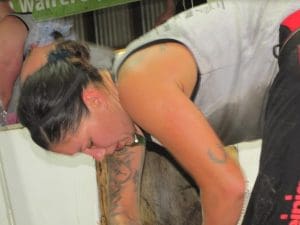 But milestones were also passed by Marlborough contractor and university graduate Sarah Higgins, who shore 528, Piopio-based shearer Natalya Rangiawha, from Raglan, who shore 507, and Amy Silcock, from Wairarapa farming locality Tiraumea, who finished with 423.

All four are regarded as relatively early in their careers, with the most experienced being Silcock and Higgins, who are regular performers on the competition circuit.

But it was the youngest, 23-year-old Whitehead, who stunned everyone, looking possibly more fresh at 5pm than she had when starting 12 hours earlier, with her second 600-lambs tally within little more than a month after increasing her personal best by close to 50 percent in just two months. 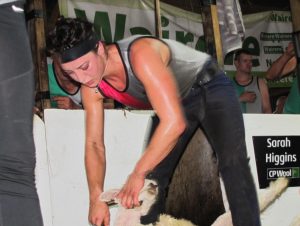 Sir David Fagan said Megan Whitehead looms now as a serious challenger to the solo women’s record of 648 set by Emily Welch, of Waikaretu, in 2007.

“Wouldn’t that be a great day? 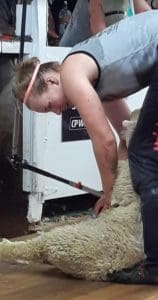 Higgins, 27, originally from Havelock, but now based in Blenheim, was the most well-known of the four shearers. Her previous achievements include in 2015 becoming the first person to win Golden Shears titles in wool handling and shearing, adding the novice shearing title to the junior wool handling title she won two years earlier.

Rangiawha, also 27, was 5th in the 2018 New Zealand Junior championship final in Te Kuiti in 2018. Silcock, 32, has been shearing in competitions for several seasons, but was shearing Merinos in Australia when she got the call to replace injured original hopeful and Scottish shearer Helga Sinclair, at about three months’ notice.

Particularly amazing for the crowd of 200 cramming the wool shed beside State Highway 41 late in the hot afternoon, was that the quartet saved the best for last.

They opened the day with 463 in the first two hours from 5am to breakfast, an average of 57.87 lambs a quarter-hour between them, already well on target to pass the dream target of 2000.

But they shore 416 in the final run of 1hrs 45mins, an average of 59.43 per quarter-hour, chief referee Martyn David, from Wales, commenting that despite the huge effort the quality got better and better all day. 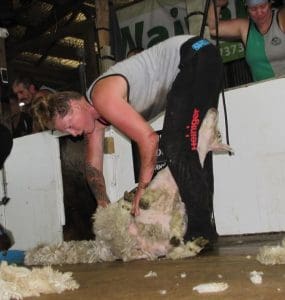 Organiser Jill Angus Burney, who in 1989 shore a solo nine-hour record of 541, was overwhelmed by the support for a record that cost about $15,000 to stage.

CP Wool became the major sponsor and dozens of volunteers came from throughout the country to help prepare the Romney lambs and the shed and to work throughout the day or support the women to get them over the line.

One retired Southland shearer estimated up to 20 had come north to support “our girl – Megan Whitehead,” from a family he said has contributed immensely to the shearing industry.

Moments after patting her last lamb through the porthole to the count-out pen, Whitehead was mobbed by friends.

“You’re a machine, a machine,” said one. Marg Baynes, who set a two-stand record with daughter Ingrid in 2009, said: “You look as good at the end as you did at the start,” to which Whitehead replied: “I’m alright.”

Encouraged by father and former shearer Quentin Whitehead, Megan said she’d often thought of doing a record attempt, but not for at least another two years.

“This morning I was a mess,” she said. “Just nerves.

“There were a lot of expectations.”