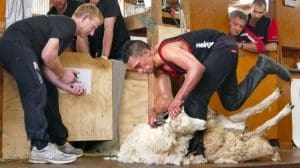 The abandoned attempt left 2014 world champion Rowland Smith still holding the record with a tally of 644 he set in England on July 24 last year.

Samuels had shorn 264 after three-and-a-half hours of the attempt at Argyle Station, Waikaia, north of Gore, before the decision was made to end the attempt about 11.15am this morning.

The shearer needed an average of at least 161 sheep for each of the four two-hour runs to break the record Smith shore in England last July. However, Samuels shore 150 ewes in the first run from 7am-9am, already 11 short. He shore second-run half-hour tallies of 39, 38 and 37 before the decision was made. The 34-year-old Southland shearer had previously held the record at 605 for five months last year.

Temperatures were expected to soar well over 30 degrees Celsius at Argyle Station. The average clip from 10 ewes in a wool weighing held before the attempt was 3.69kg, well above the minimum requirement set by the World Sheep Shearing Records Society.

Smith last year added another 39 to Samuels’ former record by maintaining a pace of just over 80 an hour for four successive runs of 161, with no sheep rejected by an international panel of judges appointed by the World Sheep Shearing Records Society.

Shearing Sports New Zealand said Smith won competitions in Taihape on Saturday and Rotorua yesterday, and then headed south to witness the challenge, saying it was a mark of respect for anyone prepared to give the record a go.

“That’s what records are for,” he said. “They’re there to be broken.”