NEW Zealand researchers believe selection and breeding of low methane-emitting sheep can make a substantial contribution to mitigation of the greenhouse gas at a low cost to industry.

The AgResearch team has been using accumulation chambers that measure methane emissions from sheep to select animals for breeding programs to effect flock-wide emission reductions.

Sheep account for one third of the enteric emissions in New Zealand, with cattle contributing most of the remainder. About 84pc of New Zealand’s methane emissions come from grazing livestock. 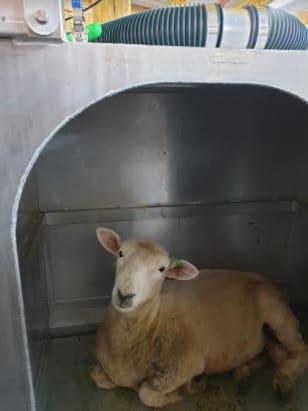 A sheep in a portable accumulation chamber. Image – AgResearch.

Over the last two years more than 5000 sheep have been measured for methane emissions on NZ ram breeders’ farms and two small research flocks have been selected for divergent low and high methane to provide the data for the potential lowering of emissions in New Zealand flocks.

Methane emissions have also been measured in a commercial research flock and methane breeding values included in a maternal selection index at a hypothetical cost of NZ$100 per CO2 equivalent using the GWP100 metric for describing the warming impact of greenhouse gases. Research breeding values for methane emissions have also been implemented within the national breeding scheme – Sheep Improvement Limited. Beef and Lamb New Zealand is looking at including the research BV in an index.

“The realised genetic progress made in methane breeding values has been used to estimate the impact of measuring a proportion of the New Zealand commercial flocks,” the researchers said in a paper presented to the recent Association for the Advancement of Animal Breeding and Genetics Conference in Adelaide.

The researchers have concluded that breeding is a viable option to make real progress towards carbon neutrality with a very high rate of return on investment and a modest cost per tonne CO2 equivalents saved, regardless of the accounting method used.

“We have demonstrated a 1-2 percent reduction per annum, in our commercial research flock since methane breeding values were included in the index, maintaining genetic gain for all other traits.

“We have also estimated that if we achieve less than one half of this reduction in the breeding tier in the national flock, given likely adoption rates, and including genetic lags in the deployment of improved livestock, we can use breeding to make a substantial contribution to methane mitigation at a very low cost to industry,” the researchers concluded.

The researchers also said overcoming the lack of high throughput emissions measurement technology for use in cattle could, given the wide use of artificial insemination and lower cattle numbers, provide greater benefits from breeding than in sheep.

“Yes it does, the research breeding value is available to all who either measure or are genetically connected to a flock that is measuring ie. recording progeny from a shared sire in two consecutive years.”

She said more than 25 NZ breeder flocks are now being measured for methane emissions. 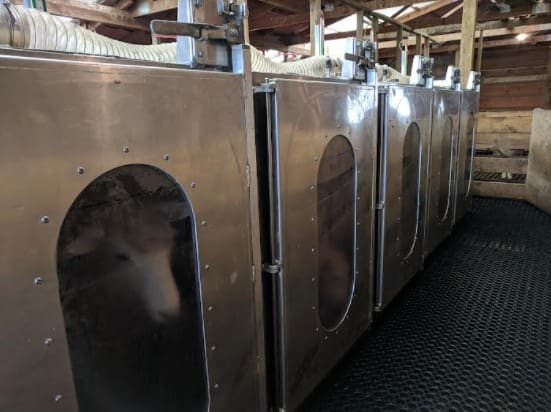 The trailer-mounted portable accumulation chambers are built at AgResearch’s campus at Lincoln in Canterbury and measure methane oxygen and carbon dioxide gas emissions for one hour.

“The gas measured is converted into grams of methane emitted per day and this is the trait used for the breeding value.

“Current cost is NZ$30 per animal, but this only needs to be done once in the animal’s lifetime,” she said.

Dr Rowe said the benefits of the research are manifold.

“It enables breeders to use a breeding value – basically auditable proof that they are lowering their livestock emissions on farm, it enables the genetics of the stock to be included in the emissions calculators and it enables us to show in the research flocks what is physically possible using breeding as a mitigation tool.

“It also provides us with a tool to test the impact of other mitigation strategies such as feeding.”

He said a maximum of genetic gain of 1 percent per year would never be enough to drive adoption of an offset method on breeding for low methane traits.

“The second challenge I think comes in the low priority this trait would get in a multi-trait selection index.

“The third challenge we have encountered is that we think breeding for absolute reductions in methane could be selecting for faster rumen rate of passage, which would suit the feedlot industry and the dairy industry, but would not suit the industries that require a high functioning rumen for higher fibre and low quality forage,” Professor Eckard said.

“On the other hand, if the focus was on selecting for higher feed conversion efficiency, that would be higher ranked in a multi-trait selection index, but also be more adoptable by farmers without carbon offset income incentives.

“This then gives the industry the option to reduce animal numbers while maintaining production levels, thereby achieving reduced methane per unit of product, higher productivity, but also perhaps improve pasture residuals and ground cover in the process.”