BLUETONGUE, Anthrax and footrot diagnoses have been crucially ruled out in recent sheep and cattle disease inspections in north-west New South Wales.

But continued vigilance from livestock producers has been called for by NSW Local Land Services district veterinarian Dr Shaun Slattery, especially for footrot in introduced sheep.

In the first six months of this year, Dr Slattery did 78 on-farm livestock disease investigations in the Walgett and Narrabri areas.

But all sudden death investigations were able to exclude Bluetongue and Anthrax, and he confirmed no cases of footrot, which was considered a possibility with the large numbers of sheep being introduced into the region.

However, Dr Slattery said there is a need for continued vigilance by producers.

“If you see something unusual, call someone about it and call early rather than later.”

LLS said the worst drought in living memory and the relieving rain that followed in parts of NSW provided NSW Local Land Services with a ‘field laboratory’ for observing potentially devastating livestock diseases. The investigations also allowed LLS to work with producers on surveillance to exclude serious animal diseases.

Area is an important first line of defence 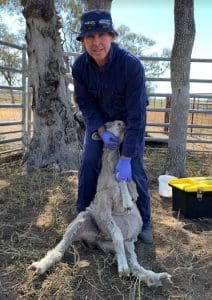 Dr Slattery is keenly aware that the Walgett/Narrabri area represents the first line of defence in detecting notifiable animal diseases that could enter NSW from Queensland and further north in Australia.

While it was a relief to receive drought-breaking rains in February, Dr Slattery said he saw a spike in farmers reporting livestock diseases and he was concerned.

“In the first six months of this year, I conducted around 80 investigations which was roughly double the amount I would see in a normal year.

“Also linked to the breaking of the drought, many of the diseases I investigated presented with unusual clinical signs and history,” he said.

“It was distressing to see losses of livestock people had invested so much in emotionally.

“One family I visited lost a couple of hundred ewes they had held onto and hand-fed through drought, only to have them die after the rains came,” Dr Slattery said.

Dr Slattery said the diseases he detected — nitrite/nitrate poisoning, foot abscess caused by orf infection and contagious ophthalmia of sheep (blight) — sometimes presented with non-classical symptoms such as bovine ephemeral fever with little to no drooling and foot abscesses when the ground was not extremely wet.

High vector numbers were a concern Dr Slattery said the region also experienced the highest bush fly numbers he had seen in 30 years as a veterinarian.

In a number of cases, this caused behavioural changes in sheep and in one case a loss of condition, despite the good season.

LLS said the Walgett area is within the NSW region where most of the historical cases of Anthrax have occurred, although it is a number of decades since the region’s last known case. However, Anthrax can remain dormant for decades, if the spores are undisturbed. During the drought there was significant wind-blown soil movement potentially exposing any dormant Anthrax spores. With the breaking of the drought, the short pasture caused stock to eat close to the ground creating conditions for anthrax to occur if dormant spores had become exposed.

Anthrax was excluded using an Anthrax carcase site test and the heightened risk in the area has now passed.

LLS said the high midge pressure earlier in the year also raised the potential for Bluetongue, a serious notifiable disease of sheep spread by midges, but no cases were confirmed and Dr Slattery said Bluetongue was not on his radar at the moment, unless midge numbers increased with further rain.

“We always have to be vigilant and question whether each animal disease presentation could potentially be a notifiable or Emergency Animal Disease, even if it hasn’t been in this part of NSW for many years,” he said.

Dr Slattery said problem solving livestock health issues alongside landholders is one of the most satisfying parts of his job as a district veterinarian with Local Land Services.

“Every time a district veterinarian goes on-farm, conducts an investigation and excludes a notifiable disease, we are maintaining the good disease control record of NSW and helping to keep markets open.

Dr Slattery presented his findings in two webinars for veterinarians from around NSW, including district veterinarian and DPI colleagues, those in private practice and from other government departments. More than 130 veterinarians registered.

His on-ground data, as well as that from all Local Land Services District Veterinarians around the state is routinely provided to the NSW Department of Industries for disease monitoring purposes.

Dr Slattery said the webinars were intended to pass on the lessons learnt with the breaking of the drought in the Walgett and Narrabri districts to other veterinarians working with livestock. Hopefully this will assist when similar cases arise in other districts as drought conditions hopefully ease and when future droughts break.

“How livestock diseases present in the field varies from district to district and from year to year.

“Often these are significantly different to the classical descriptions in many of our textbooks,” he said.

“It is important that field veterinarians share their case reports with others working in the field.

“The more the knowledge is available to the wider Australian veterinary profession, the more equipped we will be in the future to manage potential threats and outbreaks together.”

Dr Slattery encouraged livestock producers who are still in drought or in the breaking phase with livestock health problems to contact their Local Land Services district veterinarian or private vet, especially when it is a presentation outside the producer’s normal experience.

“As my recent experience has shown, not only are we able to rule out serious diseases, but we have been able to prevent further cases, and provide advice on management and treatment for ill animals.”