MAJOR British supermarket chain Tesco has flagged its future support of pain relief for lamb castration and tail docking with its recognition of Numnuts at an annual agtech summit.

Tesco has announced Senesino’s Numnuts product as the winner of its Agri T-Jam at the World Agri-Tech Summit 2020 pitch day last week.

Senesino is a Scotland-based animal agtech start-up and its T-Jam success will give it the opportunity to work with the leading United Kingdom retailer and its supply chain partners, initially in the United Kingdom.

Numnuts pain relief (NumOcaine) is injected at the same time as a rubber ring is applied to the tail or testes of a lamb. Senesino founder Robin Smith said about 1 million Numocaine doses were sold in Australia this year, but this represented less than two percent of the nation’s flock.

Meat trade and analyst Simon Quilty said although the United Kingdom is not among Australia’s top 10 lamb destinations, for the past two years it has taken more than 5600 tonnes of product, and exports from January to September this year are up 15 percent year-on-year, at 3747 tonnes.

“It’s an important market, they are all important.”

Senesino founder Robin Smith said the T-Jam win is “a lot more than ‘every little bit helps’, it is a substantial commitment by a major UK retailer in helping to improve UK farm animal welfare.”

“We are delighted that the team at Tesco are excited as we are about helping to repatriate our technology back into the UK (where it was invented), then assisting the tens of millions of lambs with their Numnuts,” he said.

Mr Smith said Tesco, with a turnover of A$115 billion is by far the UK’s largest supermarket with 27.5pc market share, compared with Asda and Sainsbury with around 15pc each, and well within the top 10 supermarkets worldwide by any measure.

Tesco’s Head of Agriculture, Natalie Smith, said the T-Jam judges were very impressed by the standard of applications and presentations from the 2020 Agri T-Jam finalists, with a number of companies being highly commended by the judging panel.

“It was a difficult decision picking one winner, but Senesino (Numnuts) was chosen as the company that would greatly benefit from further support from Tesco and its supplier partners to trial and scale up a simple piece of technology that has the potential to improve the welfare of thousands of animals within our supply chain.”

Mr Smith said Tesco has a strongly stated animal welfare policy which is pursued throughout its business.

“Indeed the most recent survey of 150 supermarket chains worldwide by NGO Compassion in World Farming in their Business Benchmarking series placed Tesco close to the top in terms of leadership with farm animal welfare which was recognised as integral to Tesco’s overall business strategy.

“Tesco’s animal welfare policy is clearly a reflection of consumer demands as identified, for example, in the 2015 Mintel report ‘The Ethical Food Consumer’ where consumers scored ‘A company that guarantees meat is from animals where the animals are looked after well’ above all other attributes,” he said.

Mr Smith said Tesco’s interest in Numnuts is that its adoption across their network of supplying farms has the potential to improve the welfare of thousands of animals within their supply chain rapidly and effectively thus contributing further towards its animal welfare strategic intent.

“It is very difficult to predict what the outcome of Brexit trade deals will be, yet we do know that UK farming prides itself in high animal welfare standards and it is likely that if international suppliers wish to access the UK market they will need to demonstrate best — or better as is the case of Numnuts use in Australia — practice to sell into the UK.”

Mr Smith said the clear indication from Numnuts success against a wide range of 170 other very worthwhile technologies from 42 countries in the World Agri Tech Tesco T-Jam event is that farm animal welfare is a strategically important issue at the core of Tesco’s business.

“We would expect that Tesco’s interest in promoting greater adoption of pain relieving methods across a wider range of animal husbandry procedures and a wider range of species is likely to continue.” 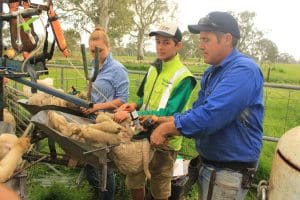 “In a general sense, there is no doubt that as time goes by, that more and more people are requiring further assurances and the latest technology and animal welfare treatments like that, to tick their boxes.

“I think that if there are pain relief remedies at the basic level it is in growers’ interests to encompass them, because if some of those requirements aren’t in place with some importing retailers now, they probably will be in the future,” he said.

“My thinking is that it is better to get ahead of the curve, because inevitably change is coming and people’s demand for more information about what they are eating, where it’s from and how it’s treated, are only going to increase.

“We don’t do that as a marketing ploy, we do it because it is a genuine requirement and demand from retailers requiring further assurance around what they are assuring.”

‘We will never go back to not using pain relief’

Achieve Ag Solutions consultant Nathan Scott said he recommended all his clients use pain relief for castration and tail docking. He said people are using various combinations of pain relief products, including Numnuts.

“And the vast majority, as soon as they use any type of pain relief, there answer is: ‘We will never go back to not using pain relief’.

“Production benefits are a bit sketchy, but the visual change in animals from pain relief process is enough for people to be very clear in their own minds that they need to keep doing it,” he said.

“I would say it is more of a moral change rather than chasing a production benefit, and people are very comfortable in that position.”