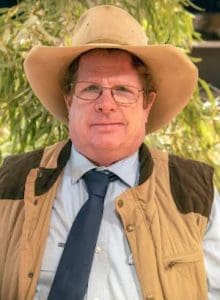 The Therapeutic Drugs Administration is considering an Australian Veterinary Association application to amend the TGA’s S5 scheduling of injectable lidocaine (NumOcaine’s active ingredient) which would allow its provision without veterinary prescription.

“I am truly so proud that Rick and I have invested in the Numnuts venture and truly will be a good day when we are able to use it on our calves,” Mrs Britton said.

Up until 2006, the Brittons were sheep producers – with about 20,000 sheep — until wild dog attacks drove them into cattle. After seeing a Landline piece on Numnuts, they saw the potential for the pain relief tool in the beef industry, recognising that animal welfare is becoming part of all producers’ social license.

“I thought if you are in the game and not game to put your money in, you shouldn’t be in there.

“Their biggest issue was having cash to maintain supply to keep up with demand,” Mr Britton said.

However, Mr Britton is critical of MLA withdrawing its initial submission of support to the Therapeutic Goods Administration’s rescheduling of Lidocaine/NumOcaine from S4 to S5 on the Poisons Standard, after realising the NumOcaine quick change cartridge was not ‘tamper-proof’. The rescheduling would allow the sale of NumOcaine without veterinary prescription.

“Here is our leading red meat lobby group which has put a lot of money into Numnuts and the lamb industry has run with it and now they are trying to put a handbrake on it?”

On 15 February, when asked his view on Numnuts, MLA managing director Jason Strong told Senate Estimates the product had been incredibly successful and had been a great solution for sheep producers to manage pain. But he said MLA had decided that the rescheduling of the product “was not something we should have a position on.”

Parts of Mr Strong’s evidence were indistinct; however, he told the Regional And Rural Affairs and Transport Committee it has been “misreported” that MLA did not support the rescheduling of NumOcaine from S4 to S5.

“That’s not the case at all; we absolutely support the development and use and broadscale use of that product in every way it possibly can be ….” he told Estimates.

Early last year, MLA’s then program manager for animal welfare and biosecurity, Johann Schröder gave his full support to NumOcaine’s rescheduling from S4 to S5 on the Poisons Standard, on a TGA feedback form.

MLA said $5.57 million has been spent on the development and efficacy testing of Numnuts, comprising about $1.71 million in levy investment, and about $3.85 million funded through the MLA Donor Company (MDC), which is made up of $1.91 million from Senesino matched by the MDC. MLA said any further funds invested by Mr Smith’s team to support the development of Numnuts were not in partnership with MLA.

As a beef producer, Mr Britton said he is happy to see his levy spent on Numnuts.

“It doesn’t matter what husbandry practice you are in, if (Numnuts) takes off and goes forward it would give us our social license on animal welfare and pain relief.”

He believed MLA’s position on NumOcaine’s rescheduling would not be shared by its levy payers, who would support making the product more available.

“You can’t sit on the fence, you are the CEO of MLA, you don’t have the privilege of sitting on the fence, not after putting that amount of money in.

Mr Britton did not accept the Australian Veterinary Association’s argument that making NumOcaine more available through resellers without veterinary prescription might lead to off-label use.

“I buy a lot of other chemicals through my livestock agent … it’s just making an excuse that this could be detrimental or someone could use it for ill gain.

“There is a lot of other stuff that people can use for ill gain,” Mr Britton said.

He believed as vets are trained in animal welfare they should support the wider uptake of Numnuts.

Mr Britton said it would be easier to get products like NumOcaine via his stock agent rather than through a vet in Longreach or Mt Isa.

“We don’t have vets running around everywhere, but we have a lot of livestock agents.”

Mr Britton also queried why the TGA is considering AVA’s application for it to reverse its initial decision to approve lidocaine/NumOcaine’s rescheduling to S5 status.

“They should stick to it — they’ve already made the decision nothing has changed.”

“This is followed by a period of public consultation on the interim decision before the Delegate makes their final decision, which is published on the TGA website.

“The final decisions of the March meetings are planned for August 2022,” the TGA said.