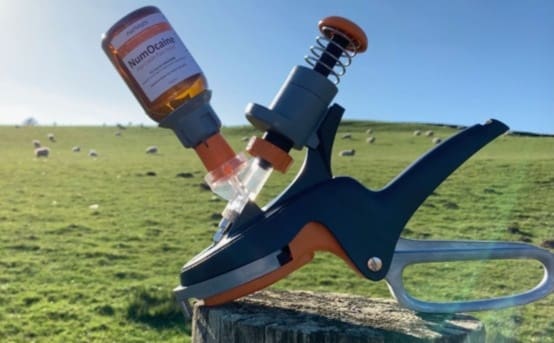 AUSTRALIAN sheep producers are being invited to participate in expanded on-farm commercial trials of the lamb marking pain relief system Numnuts in 2019.

Numnuts involves the injection of the local anaesthetic NumOcaine with a single action, ergonomically designed handheld device that also dispenses a rubber ring for tail-docking and castration.

MLA general manager – producer consultation and adoption, Michael Crowley, said MLA will contribute funding to the next phase of on-farm commercial trials in coming months, including at least partially subsidising the Numnuts applicator cost for producers.

“Initially, the research will look to include as many of the 500 units of the Numnuts device being made available to Australian sheep producers during this first commercialisation phase.

“The research will look to gather comprehensive on-farm data from producers on the effectiveness of the product and will complement field testing already carried out on 15,000 lambs in 2018 on three properties, including prime lambs and Merinos,” he said.

“Trials of Numnuts in Australia so far have produced positive results for temporarily mitigating pain during lamb marking, and reducing pain-related behaviours such as the ‘tucked up’ posture.

“However, larger numbers of animals need to be treated in order to improve the robustness of the data, and to give producers confidence that Numnuts can provide the animal welfare benefits they seek,” Mr Crowley said.

Numnuts has been developed in a partnership between MLA and Scottish product design and engineering firm 4c Design, and licensed to Senesino for delivery to the Australian sheep industry. Clinical evaluation of Numnuts in Australia has been done by researchers at CSIRO and the University of Melbourne.

Mr Crowley said producers and veterinarians can register their expression of interest on the Numnuts website www.numnuts.co.uk to participate in the commercialisation trials. Participating producers will also need to work with a veterinarians registered to dispense NumOcaine.

There is a limited number of applicators available and sufficient NumOcaine to treat about 450,000 lambs in 2019. A full commercial launch date for the system has not been finalised.

Mr Crowley said the ongoing development of Numnuts provides another tool to mitigate pain for livestock during husbandry procedures, but it also demonstrates that the Australian livestock industry continues to invest in research to ensure we address community concerns about painful husbandry procedures.

“We need to collect more data on-farm to further demonstrate the cost benefits of the product. It is also important to measure other factors that may be influenced through its use such as reducing mismothering and mob droving time.

“Arming producers with the latest on-farm tools and techniques is hugely important, backed up with training to ensure they are capable of accurately assessing pain mitigation procedures.”

Numnuts had a positive impact at Leeming marking 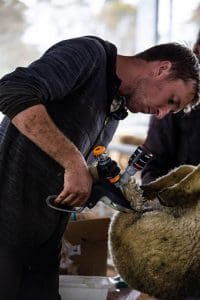 Victorian prime lamb producers, Tim and Georgie Leeming, Pigeon Ponds, were among the first producers involved in the field testing of Numnuts in 2018.

Mr Leeming said of the more than 10,000 lambs they weaned, Numnuts was used on about 1200 lambs during marking, and had a positive impact.

“Animal welfare is paramount for our operation and using Numnuts in the field trials took away any visual pain – after marking, the lambs were standing up and weren’t displaying signs of pain.

“Another practical benefit was we could bring the mob in, process them and then take them back out to the paddock with their mums without delays, preventing mismothering,” he said.

MLA, Australian Wool Innovation, the Moredun Foundation and CSIRO contributed to the development of Numnuts.