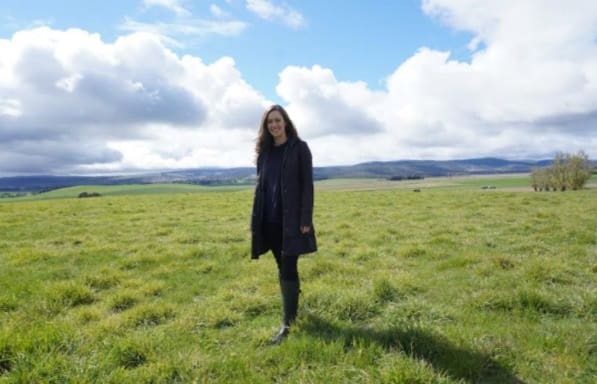 MAKING greenhouse gas auditing fairer for wool, pastures more resilient for sheep operations and grass-finishing of lambs profitable are the goals of some of the latest 2022 Nuffield scholars.

Colette Glazik at Ross is supported by Australian Wool Innovation in her research into fairer ways to audit the greenhouse gas emissions from wool production.

The former public sector employee and qualified lawyer, and her partner Joey McKibben and their two children moved to her parents’ farm, ‘Lewisham’ at Ross, Tasmania, where they run a self-replacing Poll Merino flock.

“We have a strong focus on sustainability and animal welfare – we were early adopters of the Responsible Wool Standard certification in Australia,” Colette said.

But when a long-time wool buyer asked the family to have their farm’s carbon emissions assessed, she found the methodology used did not take into account the low input farm’s cell grazing principles and exclusion of substantial areas of old growth tree from livestock. This resulted in the wool operation having a poor carbon credit rating, she said.

“I hope that my research will provide wool producers more clarity on their path to carbon neutral farming.

“I would also like to identify areas of current carbon accounting methodology that require further research with the aim of finding solutions that can be adopted by policy makers so carbon accounting is fit for purpose for wool growers.”

Colette plans to travel to New Zealand, Argentina, Portugal, Italy, the United Kingdom, Germany and South Africa, to research her topic to ensure the long-term competitiveness of the Australian wool industry. Jesse Moody believes there is a clear correlation between soil and livestock health.

Supported by Rabobank, Jesse will investigate how to develop more resilient, drought-tolerant soils and pastures because he believes there is a clear correlation between soil health and the success of livestock production, particularly in a drought.

“In the Mulga lands and black soil flood plains of western Queensland our conventional grazing practices don’t seem to working as effectively as they once did, especially with the seasons becoming more variable,” Jesse said.

“In a drought, our soils go backward and so does our business, so that it can take years to recover.

“It comes down to maintaining ground cover through controlled grazing, and that’s the focus of my study – managing soil health to promote pasture management and drought resilience through grazing principles that promote soil regeneration,” he said.

Jesse plans to visit grazing experts and soil scientists in New Zealand, Argentina, the United States, Namibia and Zimbabwe in Africa, as well as local researchers and regenerative grazing proponents. He is a member of Queensland’s Leading Sheep producer advisory panel and his topic aligns with Australian Wool Innovation’s ‘Wool 2030’ strategy’s focus on regenerative agriculture.

“I’ve spoken with local producers who share my concerns about developing more resilient, drought-tolerant soils and pastures to handle the increasing variable climatic conditions, which would in turn, increase our carrying capacities, allow us to boost our flock sizes and at the same time, ensure a stronger, healthier business,” Jesse said.

Lamb operation is moving to a regenerative system 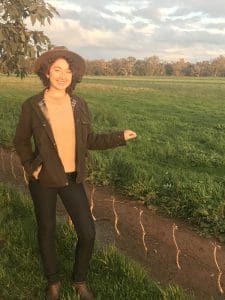 Victorian lamb producer Jessica Conlan will use her Nuffield Scholarship, supported by the William Buckland Foundation, to research better ways to finish lambs on grass.

Each year, Jessica and her mother, Jo, sell around 2000 heavy lambs off their farm ‘Tumbywood’ in Elmore, Victoria. The sheep graze improved pastures and in drier conditions lambs are finished on grain, but the Conlan’s are transitioning the farm to regenerative agriculture to boost productivity and resilience.

“We were amazed by the growth rate of the lambs on the multispecies crops.

“It was also a great learning experience to see the sheep choosing to graze different species throughout the season,” Jessica said.

With an increasing global appetite for grass-fed meat, Jessica believes Australian lamb is well placed to take advantage of this trend.

“The MLA Global Consumer Tracker shows that Australia’s largest lamb importers, China and the US, will pay more for Australian lamb due to good animal welfare, safety, quality consistency and higher nutritional value.”

Resilience is a strong focus of 2022 scholarship recipients

The new Nuffield scholars were among 12 recipients announced at the annual Nuffield Conference, being held virtually today and tomorrow.

Thanks to the generous support of investors, each 2022 Nuffield Scholar receives a $30,000 bursary to spend on travel in the next few years. They will visit, learn from and collaborate with some of the world’s leading agricultural businesses and research institutions.

Nuffield Australia chief executive officer and 2013 scholar, Jodie Redcliffe, said the Nuffield scholarship program will give the producers and agribusiness professionals global perspectives that will help them learn, remain competitive and grow.

“Among the cohort, there’s a strong focus on finding and sharing innovations that can make Australian agriculture and its associated value chains more resilient to changes in the environment, regulations, markets and consumer expectations.

She said COVID-19 has hammered home that adaptability and leadership is crucial for all business.

“We are looking forward to working with this group who are driven to help their business and industry thrive now and into the future, as we navigate a world recovering from the pandemic.”

Nuffield Australia is looking forward to borders reopening to allow the scholars to conduct valuable research that they will share with industry, Ms Redcliffe said.