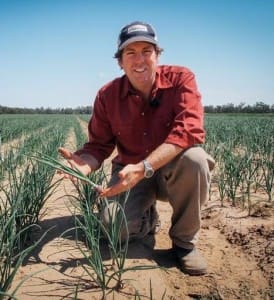 NEW South Wales’s 2015 Farmer of the Year Ed Fagan takes pride in the fact that his farm can produce a complete meal – including with lamb or beef.

Sheep and lambs play an important role in the mixed farming operation on the banks of the Lachlan River.

He said the farm has two distinct geographic sections – the Lachlan river flats and high country.

“One of the thing the judges thought was pretty impressive was that the roughly 2000 acres that is off the river flats is divided into small paddocks, mostly about 25 acres with a few larger ones.

“We basically cell graze (the sheep).”

The sheep also play a role by consuming waste out of the vegetable operation, rain-affected hay or downgraded grain.

“We then have the ability to pull out all the stops and fatten lambs well.

“Sheep actually love spinach, they eat a fair bit of that.”

And he said if you eat beetroot “everything goes red”.

“So we have put lambs into the market when we were a bit quick getting them out of beetroot and into the saleyards and they looked like they were haemorrhaging.

“They get mouths and red arses, it does look a bit comical, but the main buyers know where they come from and what we do.”

Sheep were lot fed on the property from 2002-2009, with bought-in store lambs fed a home-made mix, aiming for a 4:1 feed to weight gain ratio.

“We run about 2000-3000 Border Leicester-Merino ewes and a mix of Poll Dorset and White Suffolk rams.”

Lamb trading is opportunistic and he hasn’t bought in any lambs for the past 2-3 years, but it was a big part of the business during the drought years.

“And also because we’ve got a large river frontage and when things are quiet horticulturally, the sheep go down and graze along the river.”

“Our pasture mix has changed and we certainly graze in a different way to what we did before.”

In the last few years a lot of my attention has been taken up by the horticulture because it is so intense, but we have always had lambs here.

“And when I grew up here as a child a lot of my time was spent in the sheep yards,” he said.

“How many farmers can produce a complete meal?

“Every fortnight we kill a lamb here, so I do eat my fair share of it,” Mr Fagan said.

“I can have lamb with onions and asparagus, salad, popcorn, beetroot, all of it.

“So we can a complete meal here.”

“It is innovative initiatives in the farming sector like this that will build the future of the state’s $12 billion primary industries sector.

Mr Schoen said this year’s finalists demonstrated the state’s diverse farming enterprises and he congratulated them on their brilliant achievements.

“Ed Fagan, Ewan McAsh and the Halls are innovative, very hard working and passionate about agriculture.

“They show qualities in business management skills and sustainable production practices that ensure a high standard quality product we all can enjoy.”

The award is an initiative of the NSW Farmers Association and NSW Department of Primary Industries, with support from The Land and SafeWork NSW. Mr Fagan won a cash prize of $10,000 and the two other finalists receive $2000 each.