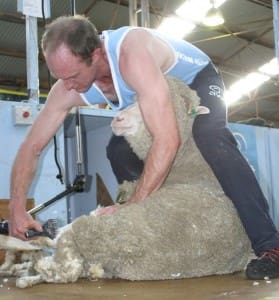 The 34-year-old finished his 12 Merino wethers first in 20.47 minutes in the open final, a good three minutes ahead of dual world champion Shannon Warnest from South Australia (23.49m), who had fewer board penalties – 75 versus 92 – before outside penalties were tallied.

Daniel admitted after the final he was concerned about Shannon’s legendary cleanliness on the board, but McIntyre scored fewer outside penalties (351 versus 353) to be only 1.25 behind on total quality points. And despite 3 full points for a cut, McIntyre’s quick finish helped give him a 4.85 point final advantage – 102.27 versus 107.12 – to secure the title.

“He (Shannon) is usually pretty good out the back, but I managed to hold him,” Daniel said.

Daniel said there was a lot of work on the wethers around the points, but they combed well.

“They were good competition sheep, they made you work for it.”

South Australian shear Justin Dolphin finished third in the final with 112.07 points ahead of NSW’s Wayne Hosie (115.6), and the Tasmanians Robert Glover (120.67) and Steve Rigby 136.57). The top three shearers in the national open final now get to compete in the Trans Tasman test in Masterton New Zealand in March next year.

In the intermediate shearing final, NSW shearer Dylan Wilson was a clear winner on 70.25 points ahead of Tasmania’s Sam Byers (86.13), the first shearer to finish his three Merino wethers in 33.8 minutes. Third place was taken by Clint Atkinson from Victoria (96.62), followed by South Australia’s Tom Brewer (98.27), Russell James from NSW (101.12) and Victorian Ricky Peterson (101.55).