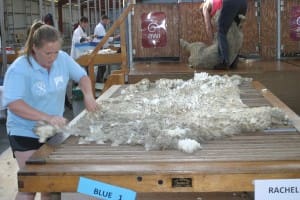 The 28-year-old was Australian champion wool handler for four consecutive years up to 2011 and then took three years to focus on her family of three children.

But at Hamilton she put in a convincing performance to defeat a top field, including the now former Australian champion wool handler Sarah Moran, from Ararat in Victoria.

“It was a bit of relief to know that I could still do it.

“It’s a bit like riding a bicycle I guess; you don’t really forget, but you lose a bit of faith in yourself,” Racheal said.

The Australian Wool Innovation wool handling trainer said she did a bit of lead-up work while coaching some trainees.

Hutchison and Wakely will now represent Australia in the next Trans Tasman wool handling test at the Golden Shears in Masterton, NZ, in March next year.

In the senior wool handling final, Victorian Clare Price was a clear winner, scoring 59.80 penalty points overall, including the lowest board points of 47. This put her more than 10 points clear of second placegetter Jaqui Foster from South Australia on 70.03. NSW’s Warren Frazer was third on 71.53 points, ahead of Elly Michelmore, SA (75.07), Jacinta Munch, NSW (79.5) and Amy Rogers, Victoria (91.83).

In the novice wool handling final, South Australian Tegan Watts won with her speed, oddment and fleece work to score 67.20 points, ahead of Sharelle Dyson, Victoria, with 68.30 points. Third was Tyrone Gordon from Victoria with 74.7 points, ahead of Tasmania’s Lucy Cooper (83.7), Alisha Milsom, SA (85) and Lincoln Suttor, Tasmania (103.60).

Shearing Sports Australia chair Step Brooker-Jones said the national championships in Hamilton attracted a good turn-out of shearers from all states, with many of the novice, intermediate shearers competing at their first national titles.

“The young novice, intermediate and senior shearers and wool handlers were all grateful to be asked and for the experience.

“I think they surprised themselves how well some of them did.”