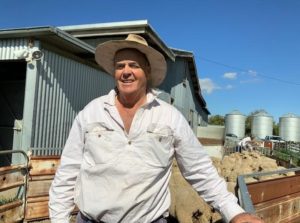 THE Gordon family has grown wool in the Young area since the early 1900s and currently joins about 1500 Merino ewes in what was, until the recent drought, a sheep-cattle operation. They stopped mulesing in 2015 after a few years of joining bare-breeched plain-bodied Merino rams, reacting to the trade’s demand for non-mulesed wool.

In this opinion piece, Mr Gordon puts his case for Australian Wool Innovation to encourage Merino breeders to move to plain-bodied sheep to remove the need for mulesing and increase production of non-mulesed wool.

IS it time to have a close look at Australian Wool Innovation?

Can someone tell me why I have to pay a levy to an organisation that is fighting me on everything I am trying to do?

One example; I need shearers, yet AWI took funding away from the shearing school at Wagga. Was it politics? The Wagga school at Riverina TAFE was promoting plain-bodied non-mulesed sheep. It was trying to teach young people to shear, which is very difficult on wrinkly sheep; shearers tend to cut them badly.

How do levy payers get back control of their levies?  Someone in government please help.  We are in dark times while ever I sell a bale of wool in Australia for which AWI has controlled how much levy I have to pay, and who I have to pay that levy to. It stinks.

Why can’t we get an independent organisation to set up a voting system that is fair and completely transparent for 0, 0.5, 1, 1.5, 2, 2.5 and 3 percent levy options? Let the levy payer choose the amount of levy they would like to pay, without any influence from AWI.

Wool growers, wool brokers, exporters, early processors, brands, and retailers are all struggling to keep their heads above water at the moment. Yet AWI is sitting up there in its ivory tower with $100 million, giving instructions on what the trade should be doing.  Everyone in the pipeline would prefer non-mulesed wool, but the trade are so weakened by COVID-19 at the moment, they are just trying to survive.

Instead of AWI trying to convince the trade they need to use wool from mulesed sheep, why doesn’t AWI try to convince wool growers to produce non-mulesed wool, then brands and retailers can stock their online catalogues with confidence?

AWI chair Colette Garnsey keeps sending me correspondence with words like: “how we are continuing to work for growers”, yet AWI is fighting me on everything I am trying to do. Then Ms Garnsey talks about “ensuring sustainability”. AWI is definitely not sustainable — $30 million extra this year, maybe $60 million next year, that leaves $30 million. They started with 120 million in reserves.

It’s the same story as the Holden motor car in Australia. Why is AWI backing a horse (mulesing) that is going to be scratched? Is AWI pouring money into something that that wool industry will eventually have to abandon?

There is not one early processor, retailer, brand, or welfare group that doesn’t prefer non-mulesed wool. Yet AWI will not get behind this and back it. It fluffs around the edges, pretending to be supportive. 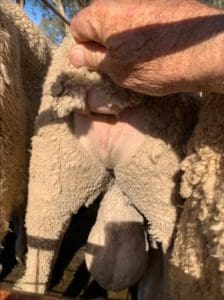 This photo I include is of a Merino ram with a beautiful bare breech. If wool growers use this type of Merino, the genetics will flow through their flock like a bushfire. Find and use a similar ram on the daughters, and the granddaughters will be there. No need for any breech modifications.

If I show this ram to the welfare groups and explain how and why I am using him, and the outcomes, every welfare person in the world will give me a tick of approval.

But AWI doesn’t give a toss about the welfare groups. I attended a day AWI put on for all the welfare groups in Sydney early in 2019. I would hate to think what it cost. They had another scheduled for early April this year, except COVID-19 Interfered.

AWI bashed their ears for seven hours about what it was doing in the so-called animal welfare areas. I estimated they have spent $40 million or more in the breech flystrike area to find a solution to mulesing. But they will never find a solution while they don’t encourage breeders to remove the wrinkles from sheep.

Why I am so frustrated?  It doesn’t affect AWI, but it really affects me as a wool producer.  The welfare groups are meeting with the trade and saying, ‘we are not happy, nothing has changed’. The welfare people want all breech modifications to stop. These people are not going away.

If the wool industry genetically changes to a sheep that doesn’t need breech modifications, the welfare groups will give us a tick of approval and disappear. They will go back to worrying about the Orangutans in Borneo. If we don’t, they will keep being a major thorn in our side forever and there are thousands of them — all potential customers.

The brands and retailers won’t move without support from the welfare groups. We have to get everyone completely on side. The stupid thing is, the sheep that does this, also doesn’t get flyblown and has more lambs, with better shape.

With the major increase in online shopping, it is critical now to have a simple message on that label: non-mulesed, in the case of animal welfare. It would have been better to have include mulesed with pain relief, but politics once again got involved. The only loser is the wool producer, but who cares?

As wool growers, we have to focus on what the trade wants, not what our fathers wanted. AWI is fighting this all the way to the inevitable – that is the end of mulesing. The practice of breech modifications will have to stop. The trade will insist, in order to be able to sell woollen apparel.

Another area where millions upon millions is being spent by AWI is trying to find a cure for flyblown sheep. Chemical resistance is rampant.  Yet, this same bare-breeched sheep in the photo will fly proof your flock in about the same time as the mules-free objectives. 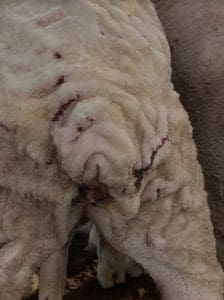 A very wrinkly breech on a Merino ewe.

You only have to ask the resident expert Narelle Sales from NSW DPI. If you get the dreaded wrinkle of your sheep they will dry out quickly and there is no stagnant moisture left between in the wrinkles to grow the bacteria that attracts the flies.

These are the reasons I get so frustrated with AWI. It’s like AWI wants to promote mulesing and wrinkly sheep to maintain the status quo in AWI’s research budget, employing 40 or 50 people in lifetime research and development jobs, including AWI management. For heaven’s sakes, the levy payers aren’t running a charity service.

If you are producing wool for next-to-skin wear or high-end women’s fashion, it has to have 100pc comfort. The thing that retailers hate more than most things is returns. If a customer returns a garment because it pills or is scratchy, they won’t come back.

You don’t get 100pc comfort automatically from wool under 30 microns. It is the softness, the lack of stiffness in the staple, which gives 100pc comfort. The fast-growing, soft-handling, bold-crimping wools, are the go. The old timers knew this.

Ms Garnsey talks about and I quote “AWI remains focussed on facilitating the development of a 10-year strategic plan.” Pity help us; more money burnt.

You can’t tell me that all the manufacturers, retailers, and brands don’t know what they are doing with promotion. Let them handle it, not AWI. The wool growers and our peak body should be focusing on producing what the trade wants – non-mulesed wool giving 100pc comfort. It is critical for the online shopper.