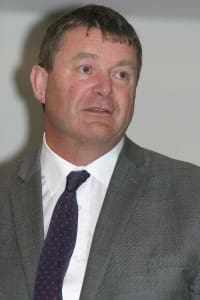 And Victoria’s State Government would be making a statement on the electronic tagging of sheep “shortly”, Dr Milne told members of the Federation of Australian Wool Organisations.

Just days after NSW Farmers president Derek Schoen claimed National Vendor Declaration accuracy improved to around 98 percent in some saleyards in NSW during compliance activity conducted in 2013, Dr Milne said NSW and South Australian sheep were involved in a Victorian physical sale-to-slaughter review that identified major discrepancies between sheep tags and the paperwork.

Mr Schoen said NSW Farmers did not think there was anything wrong with the current visual tag system.

“Compliance in NSW is well above 90 percent, which is robust for biosecurity.”

But Dr Milne said the NSW compliance work was only a desk audit, whereas the Victorian review in March 2015 compared the ear tags on sheep at abattoirs with the accompanying vendor declaration forms.

“Forty four percent of the consignments had ear tags where the PIC (Producer Identification Code), the identity of the holding, wasn’t recorded on the NVD.

“We’ve had 41pc of the NVDS where the PICs recorded on the documents actually don’t relate to the sheep,” he said.

“And then another 15pc of the consignments had transcription errors in them.

“It illustrates the point that our traceability is not good and it is not fit for purpose for a disease outbreak,” Dr Milne.

NSW and SA sheep were included in Victorian review

He said the March 2015 review included a large number of sheep from NSW and from SA.

“There was no difference in the percentages between the states.

“The NSW work is based on an exercise called Operation Tuckerbox, which was a desktop exercise with no actual checking of what the tags were in the sheep,” he said.

“This is actually going out there and looking for real what is happening.”

Dr Milne said more than 21pc of the sheep in the Victorian review came from NSW.

“So that’s what we are finding and that’s the second study of that nature that we’ve done.

“Both studies showed that the three states – SA, NSW and Victoria – had similar issues; we couldn’t differentiate between them.”

Dr Milne said in Australia there was a benefit in having a national approach to disease outbreaks and to traceability, though if any outbreak was localised there would be an argument for compartmentalising areas or states.

“I think the state approach is important, but FMD will be managed on a national basis.”

Dr Milne said he was aware that Victoria led the way on electronic cattle identification before it became mandatory nationally under commercial pressures.

He said processors are recognising that their customers are asking for traceability and this is an inevitability. A requirement for traceability with a market can apply to disease, welfare and residues.

When asked how he believed electronic traceability for sheep would be introduced to Victoria, Dr Milne said there would be an announcement “shortly”. He hoped a decision would be made within weeks.

“I can’t say when, but there will be an announcement in due course.

Dr Milne said while chief veterinary officer in Scotland during an FMD outbreak in the United Kingdom 2007, he was able to get livestock restrictions lifted because he could trace the movement of sheep in and out of the country.

“From where I sit in terms of disease control and getting markets open again, which is what Foot and Mouth Disease is all about, without traceability we are sunk.”

“The really bizarre thing is looking at our work on sheep and bale traceability, we have a system in Australia where we can chase wool all over the place, but we can’t chase sheep,” he said.