NEW South Wales authorities are encouraging the state-wide vaccination of livestock against anthrax as high-risk conditions persist across the state.

The NSW Department of Primary Industries (DPI) and Local Land Services are encouraging farmers across the state to vaccinate their cattle and sheep against anthrax – a serious disease that can kill stock of any age or class with no warning.

The department has previously strongly encouraged only properties which have had anthrax cases in the past to vaccinate all stock annually to prevent the disease reoccurring. The cost of the vaccine is about $10 per head for cattle and about $5 for sheep.

In New South Wale’s most recent anthrax outbreak, about 350 sheep were confirmed as dying from the disease at a central west New South Wales property in February this year. Anthrax deaths have also been reported in sheep flocks near Swan Hill in recent years, with one outbreak in 2017 prompting the vaccination of more than 7000 sheep, cattle and pigs by Agriculture Victoria.

A case of anthrax in cattle was confirmed in Queensland’s Dirranbandi-St George area in early July 2018. This detection was the fourth incident in cattle in the region since 2016.

It is not known if the the other eastern states have also considered encouraging anthrax vaccination; however, Sheep Central has contacted the Agriculture Victoria and the Queensland Department of Agriculture and Fisheries for their positions. The latest proactive move by NSW authorities is believed to have been prompted by the continuing dry and dusty conditions, lack of ground cover and increased risk of infection from animals grazing close to the ground in the sparse pasture conditions. 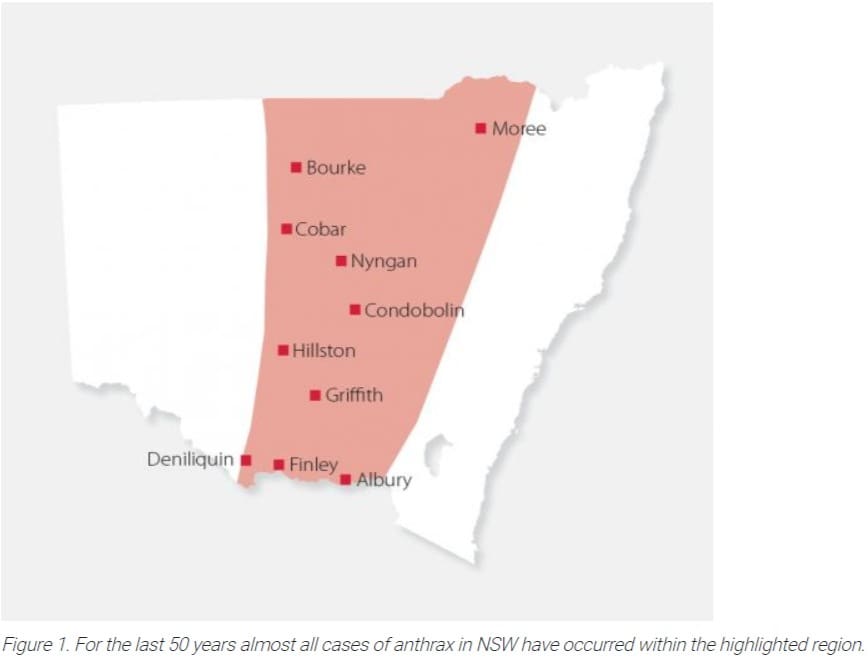 NSW DPI’s senior veterinary officer, Dr Graham Bailey said anthrax is unpredictable and annual vaccination should be considered on high risk properties as it can lie dormant in the soil for decades.

“Cases of anthrax in NSW tend to occur in an area which runs through the centre of the state; between Bourke and Moree in the north, to Albury and Deniliquin in the south,” Dr Bailey said.

“High risk properties include properties where anthrax has been detected previously, or close by properties. Farmers should contact their Local land Services to obtain advice specific for their properties.

“By preventing anthrax from occurring, vaccination breaks the cycle of spore production.

“If vaccination is continued over time, spores in the environment will die, reducing the risk of anthrax occurring in the future.”

NSW’s Local Land Services and private veterinarians each year respond to many notifications of sudden death and anthrax is excluded as the cause in the vast majority of cases.

“Farmers can apply to use the vaccine through their Local Land Services district veterinarian and once authorised, they can then place an order for the vaccine with their local rural supplier or private veterinarian.

“Farmers should be suspicious of anthrax if animals die suddenly, because in many cases there may be no signs and the disease may begin with the sporadic deaths of single animals over a few days before building to dramatic losses in a very short time,” Mr Lucas said.

Anthrax is listed as prohibited matter under the Biosecurity Act and is a notifiable disease in NSW. 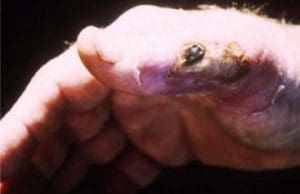 Anthrax can infect humans and in any case of sudden death of livestock, handling the carcase should be avoided and a veterinarian should be contacted to assist in determining the cause and provide biosecurity advice to protect human and animal health. According to the Zoetis Australia website, the most common type of human anthrax seen in Australia is cutaneous anthrax, otherwise known as “Woolsorter’s Disease”. This disease can occur when handling stock or carcasses infected with anthrax, with the spores entering the skin through cuts and abrasions. Although not recently recorded in Australia, it is also possible to ingest or inhale anthrax spores, resulting in a potentially fatal infection. 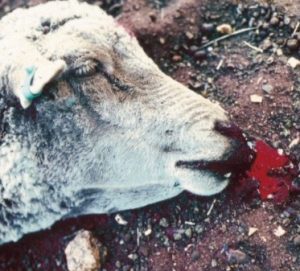 A sheep that has died from anthrax. Image – NSW DPI.

Anthrax typically presents as sudden death in livestock and can affect a wide variety of species. Cattle, sheep, goats and camelids are particularly susceptible. Carcasses often bloat quickly; and may cause bloody or tarry discharges from carcass orifices. The disease can affect one to two animals in small incidents and more than 100 animals in large outbreaks. Soil that is contaminated with anthrax can be infective for decades. 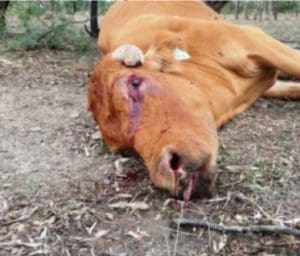 A cow that died from anthrax with typical blood coming from its eyes, nose and mouth. Image NSW DPI.

According to the Zoetis Australia website, a highly effective vaccine is available which contains a live, avirulent (ie does not cause disease) strain of anthrax. Use of the vaccine is highly regulated and permission from the Chief Veterinary Officer in each state is required to obtain this vaccine. Producers wanting to buy the vaccine need to contact a government veterinary officer or district veterinarian.

Anyone who suspects anthrax must report it immediately by calling the Emergency Animal Disease Hotline on 1800 675 888.

For more information about preventing anthrax, visit the DPI website or call Local Land Services on 1300 795 299.