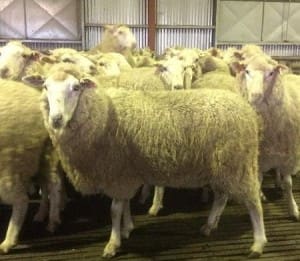 The disparity in lamb prices between Victoria and NSW balanced out in the Eastern States Daily Indicator rates, with ESDIs mostly firm. Only trade lambs rates failed to make gains during the past week. After Friday’s saleyard sales, the ESDIs for lamb, and their daily and weekly changes were: restocker 543c/kg, unchanged on Friday, up 24 cents for the week; Merino 459c/kg, down 2c, up 4c; light 492c/kg, up 1c, up 9c; trade 502c/kg, unchanged, down 9c; heavy 503c/kg, unchanged, up 1c. The national trade and heavy lamb indicators were unchanged at 504c/kg.

The ESDI for mutton closed up one cent on Friday at 335c/kg, up two cents for the week, and the national indicator was firm on 334c/kg.

Sheep and lamb numbers increased by just over 4000 to 46,014 head on AuctionsPlus last week.

A large offering of maiden Merino ewes made from $71 in on online sales, up to $131 for unjoined 16-17 month-old Willandra blood ewes weighing 51kg lwt at Moulamein, NSW. Older proven breeders averaged $102 and aged ewes sold for $98-$125. The top price was for unjoined 5-5.5 year-old early October shorn Pooginook blood ewes at Cootamundra, NSW. Older Bullamon Plains and Pooginook blood unjoined ewes with young White Suffolk lambs at foot and a 2” skin from Dirranbandi made $165.

The NLRS said the quality of the trade and heavy lambs was very good and a few shorn new season lambs are starting to appear. Mainly trade weights were penned, with fewer heavy lambs and a good supply of stores. All the usual buyers operated and competition was stronger, resulting in a dearer market.

The NLRS said lamb quality was very mixed, with some handy lines of finished heavy and extra heavyweight lambs and plainer types offered. Most of the usual buyers competed.

The NLRS said lamb quality was plainer than last week, with many smaller pen lots of mixed grades yarded.

Prices were mostly firm for the few better quality trade and export lambs. Some of the secondary domestic lambs showed an easier trend of $2-$4, with carcase finish and dryness a factor. The market reached a top of $132 for a pen of 10 heavy young lambs. The supply of heavy slaughter lambs was limited with just two pens over $130 and about 10 sales above $120.

Restockers from Corowa and the local area paid from $97-$106 for bigger store lambs over about 18kg cwt, while smaller store lambs sold to the paddock mostly made $75-$88.

The sheep were mostly heavy crossbred ewes, and excess cover was an issue for some buyers in the cheaper result. Most heavy crossbred ewes sold from $71-$90 and a big line of more than 300 head sold to a restocker for $85. Light and trade mutton sold from $45-$70 and also trended cheaper compared to the last sale.