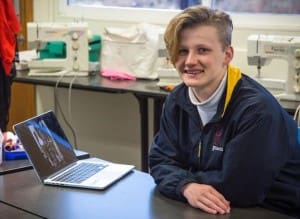 BUDDING designer and New South Wales school student Ben Colvin has won the 2015 Wool4School competition with a design for a garment he would wear to visit his grandfather’s grave in France.

Australian students were asked to design an outfit for themselves to be worn on a sightseeing trip and SCECGS Redlands school Year 10 student Ben, 15, chose France for his destination, where his grandfather, who was a soldier, is buried.

Ben is the first male winner in the competition’s five-year history, receiving an $1800 cash prize, plus the honour of having his design made into a garment by leading Australian fashion designer, Jonathan Ward. His design will also be photographed and featured in a Girlfriend magazine fashion spread.

Ben’s design, called ‘Something Missing’ is based on the concept of travelling back to a military time, but maintaining “street style”, a youthful approach to acknowledging his own interests and his family history.

“I chose Paris as my destination, imagining my dream of one day travelling with my family to the Australian War Memorial where my grandfather is buried,” Ben said.

“My design is fashion-forward and versatile, but instantly recognisable as having as having a military influence, with a khaki and red colour palette that’s subtle and perfect for travelling.

“It’s pretty incredible that I won my division of Wool4School – I really love the idea of using a sustainable Australian fabric, and it gave me a chance to really express my own style,” he said.

“The opportunity to see my design brought to life is truly unbelievable, more than I could have hoped for and a great boost of encouragement for me moving forward in fashion.” 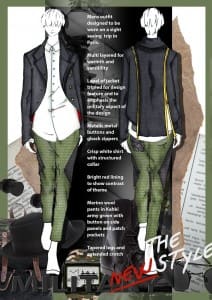 Wool4School Project Manager Ashley Hollis said Ben’s design won over the judging panel because it presented the best choice of fabric, was well thought through and demonstrated a contemporary approach.

Wool4School is an initiative of Australian Wool Innovation and Woolmark, with a focus on using Merino Wool as the main fibre and fabric. The program is linked to the National Curriculum Food and Fibre component, and involves 10,000 registered students from across 700 Australian schools.

The 2015 judging panel said the quality of the 1100 final entries submitted was exceptional. The entries total was eight percent up on last year.

Redlands textiles teacher Megan Coombes said Wool4School is a great chance for the students to get insight into the fashion industry, and really develop their design skills, applying their ideas to a given brief.

“We love having this opportunity as part of our curriculum, and we’re so proud of Ben’s achievement – as well as Sabrina Pearson and Nelson Leavers, who received honourable mentions this year.”

Sabrina is also taught by Ms Coombes, and Nelson is taught by textiles teacher Libby Thompson.

Redlands’ principal Dr Peter Lennox said Redlands is immensely proud of all its entrants, as the fashion industry is very difficult to be successful in and the students are already taking the first significant steps.