For three days from 21 October, the Albury-based Elders sub-agent will walk 130 kilometres from Albury to Wagga Wagga in New South Wales in memory of his great niece Billie Grace Richards.

“That’s why the walk is pretty important to me,” Mr Hill said.

Billie Grace was just three years old when she lost her fight against acute lymphoblastic leukaemia and a severe blood infection three days after her diagnosis on 23 October last year.

Mr Hill has already raised about $65,000, including $20,000 from his company, David Hill livestock & Marketing, that started the appeal.

Ten thousands flyers will be distributed at the Henty Machinery Field Days this week and local communites. He said donations will fund research that might prevent other families having to suffer the losses his family has.

“So I think I can get it done.

“I’ve got a masseur and an ice bath coming with us, so we’ve got it all covered.” 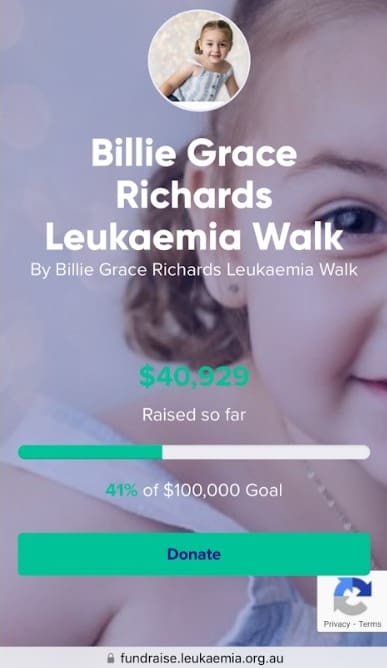 Mr Hill and his support team will wear t-shirts dyed in Billie Grace’s favourite colour – purple. He said the desire to spend more time with his grandkids motivated him to improve his health, believing if he didn’t he might not be around much longer to enjoy them.

“I’m 58 years old and I’ve got a couple more years left …I’m not going to be one of those who wants to hang around and hang around.

“I want to spend time with my grandkids and my family,” he said.

“As you get older you understand why it is more important.

“I’ve got two grandkids, but my daughter also lost a bub five years ago,” Mr Hill.

Mr Hill said he started his health kick well before he made the decision to undertake the walk.

“This has given me more of an impetus to do what I want to do.”

Mr Hill said he expected most people in the farming community – farmers, stock agents, buyers and the truck drivers – to be supportive of the fund-raising.

“We are going to raise a lot of money for the Leukaemia Foundation, so hopefully we can find a cure and parents don’t have to go through what Daniel and Tianna are going through.”

Mr Hill’s charity walk will start at QEII Square, 538 Dean St, Albury at 6.30am on Friday 21 October and end at Wollundry Lagoon in Wagga Wagga at about 4pm on 23 October.