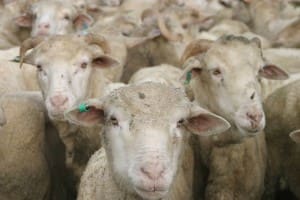 NSW DPI staff will be checking for tags.

NEW South Wales sheep and goat producers were today warned their compliance under the National Livestock Identification System will be checked at state saleyards and abattoirs over the next six months.

The campaign, code-named ‘Operation Mary,’ by the NSW Department of Primary Industries and Local Land Services aimed to increase producer understanding and compliance with the NLIS for sheep and goats.

Compliance will be checked at NSW sheep and goat saleyards by NSW DPI and LLS staff, and NSW Police Rural Crime Investigators.

Operational staff will ensure that all sheep are tagged and that National Vendor Declarations are completed accurately, especially with the recording of ‘other PICs’ on NVDs for non-vendor bred lots.

Sheep Central was told today the average NLIS compliance in NSW saleyards is running at about 90 percent, but in 2014 all states agreed to achieve 98pc short-run traceability and 95pc long-run traceability through ongoing monitoring, with business rules reviewed to ensure performance standards are met.

NSW DPI director of compliance biosecurity and food safety, Peter Day, said there is strong support in NSW for the current mob-based traceability system for NLIS for sheep and goats. However, improvements in compliance rates are needed.

“NSW has one of the best livestock identification systems in the world for tracing our livestock from the paddock to plate through the NLIS.

“Producers have obligations, roles and responsibilities at the beginning of the supply chain which sets the foundation for traceability,” Mr Day said.

“Saleyards and agents have a responsibility to ensure that the NLIS operates well in their saleyard and that their clients are NLIS compliant.

“It enhances our ability to respond quickly to a major food safety or disease incident, and helps to ensure access to valuable export markets are maintained,” Mr Day said.

“We know that producers in NSW are keen to maintain the current mob based system for NLIS compliance for sheep and goats.

“This is one way Local Land Services is working with our ratepayers and other land managers to ensure bio-secure, profitable, productive and sustainable primary industries in NSW.”

NSW not the only state with compliance issues

In August last year, then NSW Farmers president Derek Schoen claimed National Vendor Declaration accuracy had improved to around 98pc in some saleyards in NSW during compliance activity conducted in 2013.

But a 2014 study in Victoria of sheep in saleyard and direct consignments from NSW, Victorian and Tasmanian producers showed that for 41pc of all tags collected there was no record of the PIC on the accompanying paperwork; for 35pc of PICs listed on paperwork, there was no record of these PICs being on tags, and 25pc of PICs hand-written on NVDs (known as ‘additional PICs) had been incorrectly transcribed by the vendor. Saleyards involved Ballarat, Horsham and Bendigo in Victoria; Corowa, Dubbo, Cooma, Wagga Wagga, Goulburn, Griffith and Carcoar in NSW, and; Quoiba and Bridgewater in Tasmania.

A 2015 study in Victoria involving about 15,000 sheep from Victorian, NSW and South Australian producers found that for 44pc of all tags collected, there was no record of the PIC on the accompanying paperwork; for 41pc of PICs listed on paperwork, there was no record of these PICs being on tags and; 15pc of PICs hand-written on NVDs (known as ‘additional PICs) had been incorrectly transcribed by the vendor.