A BREWARRINA man has been charged over the alleged theft of sheep from a neighbouring property.

New South Wales police from the Central North Police District reported on May 12 that a 60 year-old Brewarrina man had been charged with altering authorised stock identifiers and possessing an unregistered firearm.

He is due to appear before Brewarrina Local Court on 18 June 2019, police said in a Rural Crime – NSW Police Facebook post.

“We previously reported that the Rural Crime Prevention Team executed a warrant to retrieve the sheep.

“During the execution of the warrant it was noted that the sheep had been shorn and an unsecured firearm was located on the property,” police said. 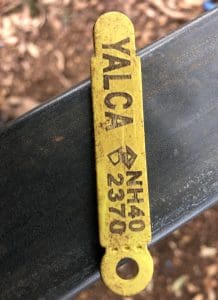 An ear tag similar to those on the stolen Tullamore sheep.

NSW rural crime investigators have also received a report in relation to the theft of 15 first cross lambs from a property on Yethra Road, Tullamore.

The theft occurred on Wednesday 8 May between 12pm and 12.30pm, police said.

“We are seeking information from the public that may have noticed, or know who owns a grey/silver coloured Nissan Patrol utility that was in the Tullamore area at the time.

“The vehicle was towing a green coloured box trailer which was strapped with a distinctive ‘W’ strap on it,” police said in a Facebook post. 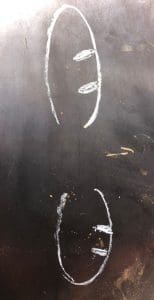 A diagram of the ear marks on the stolen Tullamore sheep.

If you know who may own this vehicle or have information about this crime, please report it to your local police station or Crime Stoppers on 1800 333 000.