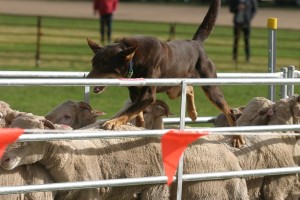 Just months after Victorian working dog owners on farms were recognised with concessions under the state’s proposed puppy farm legislation, NSW Farmers is concerned that the fundamental position of working dogs on NSW farms is under threat with proposed dog breeding regulations.

NSW Farmers said the state’s Department of Primary Industries has developed draft Prevention of Cruelty to Animals (Breeding Dogs) Standards and Guidelines in response to animal welfare incidents on puppy farms, but they will apply to all NSW dog breeders. NSW Farmers has strongly opposed the proposed regulations applying to working dog breeders and claimed they were not feasible.

NSW Farmers Animal Welfare Committee chair James Jackson said that the proposed regulations are completely unrealistic for small breeders, and they do not differentiate between working and companion dog operations.

“These regulations are intended to address health and welfare concerns with puppy farms. The regulations focus on large commercial operations and will require all breeders to have completed specific training courses, have specialised housing facilities and detailed management procedures,” he said.

“The detailed requirements will force working dog breeders to either stop operating or continue in fear of being found non-compliant, with these overly bureaucratic requirements.

“We are deeply concerned that the vital role of working dogs in agriculture has not been considered. There is no recognition of the importance of working dogs nor that these dogs are bred for a specific purpose unlike companion dogs,” Mr Jackson said.

“NSW Farmers is calling on NSW Department of Primary Industries to exempt working dogs from these requirements, and recognise the difference between working and companion dogs.”

“Working dogs need to be treated different, otherwise they will continue to be tangled in puppy farm regulation”.

The DPI will review feedback provided to a recently concluded stakeholder consultation process and consider whether amendments are required. Click here to read the NSW discussion paper and draft Prevention of Cruelty to Animals (Breeding Dogs) Standards and Guidelines.

Under the proposed puppy farm legislation in Victoria, primary producers and those contracted by a primary producer are entitled to register their dogs with local council as ‘farm working dogs’, and are eligible for a reduced registration fee.

A primary producer’s working dog bitches will not count towards a dog breeder’s fertile female dog limit and there will be no requirement to register as a Domestic Animal Business (DAB) nor meet the Code of Practice for the Operation of Breeding and Rearing Businesses 2014 (updated 2015). And regardless of the number of working dogs a primary producer owns, they will not have to register as a domestic animal business with their council.

Click here for more information on the status of farm dogs in the proposed Victorian legislation.