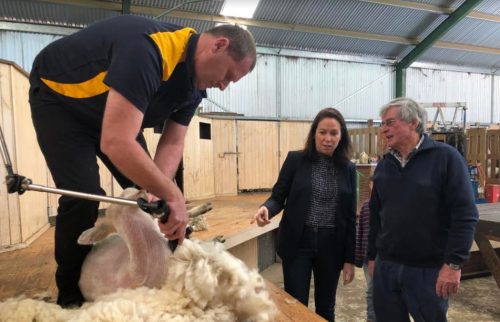 AUSTRALIA’S shearing industry will intensify its focus on the nation’s domestic labour force potential rather than looking to overseas workers to increase the number and retention of learner shearers.

The introduction of quarantine-free travel to New Zealand last month is expected to increase the number of NZ shearers and wool handlers returning to Australia this Spring, after the industry suffered a shortfall of about 500 workers during the COVID-19 pandemic in 2020.

But despite this and suggestions to access Australia’s apprenticeship and relocation assistance programs and introduce Pacific Islanders to shearing, the sector’s peak body, the Shearing Contractors Association of Australia, is sure the solution lies in the domestic workforce.

AGMove changes helpful, but not a gamechanger

SCAA secretary Jason Letchford said changes to the AgMove program under which Australians could be eligible for up to $2000 in relocation assistance when they complete just 40 hours of agricultural work over two weeks rather than in six week period, were helpful.

If AgMove workers continue in agricultural work and complete 120 hours across a period of at least four weeks, they will be eligible for reimbursement of up to $6000 for Australian workers and up to $2000 for temporary visa holders. But Mr Letchford said AgMove is not expected to have a significant impact on getting city people to take up jobs in the shearing industry.

“The industry’s main issue is around learner shearers as opposed to learner shed hands or just getting people generally into the industry.

As a general rule it is helpful, but it is still not going to have a significant impact on city people suddenly realising that they want to become shearers

“The main market that we have tapped into over the last 10 years has been the traveller/back packer market and relocation has not been an issue or major impediment to them entering the marketplace.”

Mr Letchford said the SCAA investigated the possibility of seeking the inclusion of shearer trainees in the Federal Government’s apprenticeship program. Under the program, any business or Group Training Organisation that engaged an Australian apprentice between 5 October 2020 and 30 September 2021 might be eligible for a subsidy of 50 percent of wages paid to a new or recommencing apprentice or trainee for a 12-month period from the date of commencement, to a maximum of $7000 per quarter, with no cap on the number of eligible trainees or apprentices.

He said Fair Work Australia gave “a green light” for the industry to potentially engage shearer trainees as permanent workers for the program period and then re-engage them as casual workers, as is the industry norm. However, he said in South Australia, Victoria and Tasmania it was found that registered training organisations currently doing shearer training would not be able to meet the program’s legislative requirements in terms of weekly visits and training costs.

“The number of visits that you needed to do were not funded at the right rate and structure.”

He said there was still funding to continue shearing schools and or certificate courses nationally.

However, Mr Letchford said some employers in New South Wales have signed up trainees under the federal scheme, with training being delivered by Australian Agricultural Training and TAFE (NSW), although he expected it will be difficult for the registered training organisations to meet the program’s requirements when audited. He said despite continuing funding from Australian Wool Innovation for in-shed training, there was also a shortage of qualified shearer trainers in New South Wales and interstate training organisations were not licensed to undertake the work in NSW.

Nevertheless, Mr Letchford said there were 43 shearer training schools planned this financial year in Victoria and South Australia and four in Tasmania, but less than 10 in NSW.

“That’s the area in the country, with 40 percent of the national flock and 40pc of the workforce, and that is where we need to just target at the moment.

“Our main focus is to increase the attraction rates in New South Wales and therefore increase the training opportunities for those new and existing workers in the state.”

Mr Letchford said both of the Pacific Islander schemes – the Seasonal Worker Program and the Pacific Labour Scheme – are visa-based and for unskilled workers.

“Because our main problem is not around our shed staff – which is unfortunately classified as unskilled – whereas shearing is classed as skilled, the problem is that there is no point in getting a source of labour that we can’t progress to be shearers.”

Mr Letchford said most of the shedhands in the industry were women with only about three percent going on to becoming shearers, exacerbating the shearer shortage problem.

“We need workers to come into the industry and effectively do their time as a shed hand with a look to change roles and go to the ‘skilled’ role as a shearer.

“So the SWP and the PLS do not meet those requirements,” he said.

“And the moment, if one of those people put their hands up to become a shearer they are breaching their visa by even trying to be a shearer.

“So what either needs is a different visa and then you into the skilled visas.”

He said the Federal Government is not keen on promoting programs which were not encouraging the sourcing of labour from within Australia.

“It’s hard to not back their understanding that we need to do a better job of sourcing labour from Australia, before we source labour from overseas.”

Mr Letchford said the Federal Government wanted to create the “permanent solution” from within Australia, not with overseas workers. He said it was hard to show the government evidence that the industry had exhausted all domestic avenues of labour sourcing.

So what’s next for New South Wales?

Mr Letchford said the SCAA’s priority now would be to roll out the Victorian-South Australian training model in New South Wales, by taking training schools to regional towns.

“Our number one priority is to go to the regions — the really remote areas — and attract workers in those areas and put a process in place where they get trained on the job or in their local town to be ready for the workforce very quickly.

“Medium to long-term it is about attracting more workers to the industry and getting them trained.”

Mr Letchford said he was working more with the Victorians and South Australians to bring their training school model to New South Wales.

“We are particularly trying to put together what is called the NSW Wool TAG steering committee — with farmer, shearing contractor and broker reps and trainers — to lobby the State Government to identify the problems and get the right resources to overcome the hurdles.”

He said as is done in Victoria and South Australia, industry-specific people were needed in New South Wales to identify the problem and ensure government is able to apply the resources for a solution.

“The model is there, it just needs to be driven and then implemented.”

Meanwhile Mr Letchford said there were early indications that Australia would see an influx of New Zealand shearers and shed hands this Spring.

“We just don’t know the numbers yet until they get on the planes, but it (the bubble agreement) is certainly getting rid of that impediment that made people hesitant to come to Australia to work.

“It will actually now be viable for them to come for a month because the work is here,” he said.

“Early indications are that there will be a seasonal influx of New Zealanders at a pre-Covid level if not more because of the higher pay rates.”