CERTIFIED non-mulesed wool sold for premiums of 200c/kg-plus at auctions this week as demand matched supply.

Intense bidding on these wools helped them to obtain premiums of upwards of 200 cents when compared to similar mulesed lots, AWEX said.

AWEX said after two weeks of small losses the wool market recorded an overall increase this week, albeit by the smallest of margins.

“Originally the scheduled offering was to be 50,142 bales, but by the end of the series the actual amount offered was 46,338 bales, due in part to the 3.6 percent of wool withdrawn prior to sale.

“General overall increases in these wools was a driving factor in the overall positive movement in the market.

“These wools accounted for many of the 13pc of wools that were passed in.”

AWEX said the overall market movements across the week were minimal and this was reflected in the AWEX Eastern Market Indicator (EMI) which lost one cent on the first selling day, gained two on the second, then remained unchanged on the final day — on which only Melbourne was in operation.

The end result of these movements was a one-cent increase in the EMI to 1421c/kg clean. 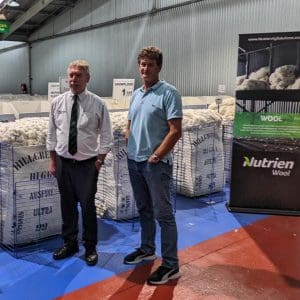 The approval criteria for 1PP certification is stringent and is carried out by a panel made up of industry participants with exceptional knowledge and experience in the area of superfine wools, AWEX said.

“The eventual supply matched the current demand at this week’s Australian wool auctions.

“Minor adjustments were again recorded, but it was a week whereby the leading market indicator accurately represented the overall market results and sentiment,” he said.

“In a replica of last week, the market opened softer on Merino fleece and skirting types and sold to relatively weak competition.

“Nonetheless, the falls were restricted to just 5 to 10ac whilst the remaining sectors of cardings and crossbred types sold to largely unchanged scenario,” he said.

“Mid-week new business was written and resulted in a firming to dearer tendency for the Wednesday selling session.

“Thursday was a day of consolidation at the standalone Melbourne sale as prices ended up stable for the day after early gains.”

Mr Carmody said Australia’s largest wool trading company continued in their dominant buying mode with purchasing extending across the offering. Techwool Trading bought 16.7pc of the Merino fleece, 16.3pc of the crossbred fleece and oddments, and 18.5pc of the Merino skirtings, to top three of the four categories.

“Buyer attention on all Merino sectors has shifted to sale lots of better length and strength measurements and of lower vegetable matter (VM) levels.

“With the generally good season, the vm levels are rising and are expected to get progressively higher through till June, making lower vm lots more valuable.

For the third consecutive week, there are more than 50,000 bales rostered to sell over a three -day sales series next week, with Melbourne selling solo on Thursday.