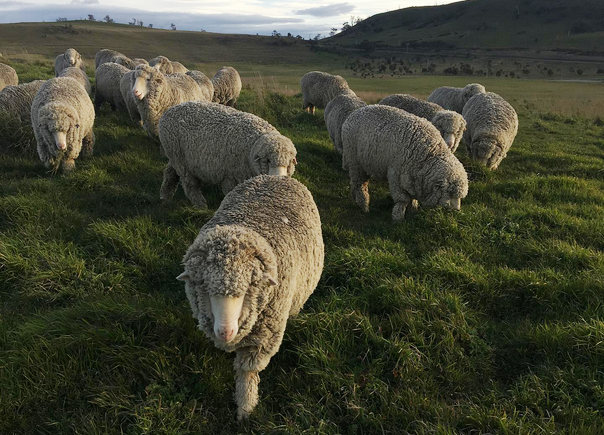 NAN Bray is not your average wool grower.

Her superfine flock is not tail-docked, mulesed or drenched, she sells no cull or cast-for-age animals, and no longer breeds lambs as she transitions to a wether-only flock.

Using Saxon Merino genetics from Allan and Carolyn Phillips’ Glen Stuart property, she is running a mixed-age flock that produces fleeces of around 17 micron and weighing 5kg, all of which go into her White Gum Wool brand.

The wool yarn retails for $265/kg equivalent, and has taken Dr Bray as far up the supply chain as she wants to go to turn a profit and deliver a yarn that reflects her ideals.

As craft knitting enjoys a resurgence spurred on by COVID lockdowns, and consumer willingness to pay for Australian wool with or without an ethical story behind it, Dr Bray’s business is not the only one riding the wave.

Dr Bray was born and raised in the United States, and bought her 330ha property at Oatlands, in Tasmania’s Midlands, in 2000, while still working as a senior CSIRO marine scientist.

She got into running sheep as an extension of her involvement with working dogs.

“My parents grew up on the land in Idaho; I did not, but I heard all the working dog stories and I loved those,” Dr Bray said.

She therefore came to wool-growing with no pre-conceived ideas, and transitioned her holding from a mixed farm to a grazing operation with a peak flock size of 1600 Merinos.

“I did things in a fairly conventional way until 2008.”

A run of dry years from 2006-09 made Dr Bray rethink the economics of what she was doing.

“I was okay with losing money for the first 10 years, but when this hit, I was shelling out money hand over fist to feed sheep.”

“By 2011, it was clear to me that no matter how well I farmed, I couldn’t make money selling my wool as a commodity.”

The realisation set her on a path to creating a wool-growing operation that turned a profit and met her ethical goals in terms of animal welfare and sustainability.

She has reduced her flock size to 600, and now buys her replacements as weaned wether lambs from Glen Stuart, the most recent at $180 per head including transport from northern Tasmania.

Dr Bray has settled on the current stocking rate to ensure each animal has the diversity of diet, regardless of seasonal conditions, needed for health.

Her grazing management is based on the idea that foraging animals will find a mix of pharmaceuticals in plants to keep them healthy.

It’s a concept advocated by US Professor Fred Provenza and known as nutritional wisdom.

Before she could put a name to the regimen, Dr Bray saw it in action when closely monitoring the grazing habits of one of her ewes as she recuperated and returned to the paddock.

Dr Bray said her flock’s diet means it does not need drenching for intestinal parasites, and tails can be left intact because scouring and dags are not an issue.

Flystrike is on the radar, and the flock is jetted every 6-8 weeks over summer with the organic compound Extinosad.

“In fly season, I’m out there every couple of days when it’s close to the time of the next jetting.”

Around 70pc of her grazed area includes introduced species, and is mostly cocksfoot-dominated ryegrass.

Weeds are not sprayed as grazing keeps them under control, with the notable exception of gorse, which is managed through botanical succession.

It’s a practice Dr Bray saw working successfully at Hinewai Reserve near Akaroa in New Zealand, where invasive stands of gorse provide protection for native seedlings which grow into trees that spell the demise of the gorse.

“It can’t grow in full shade.”

It’s a work in progress on Dr Bray’s farm.

“That won’t be done while I’m alive.”

Dr Bray said interest from other wool growers in what she is doing is minimal, and the neighbours thought she was “as mad as a cut snake”.

“I do a lot of things that are a little bit on the radical side for conventional wool-growing.”

One is not selling any of her sheep for meat.

“Based on emotion, I didn’t want to put my sheep on a truck.”

This means instead of selling the oldest 20 per cent or so of her sheep as cast for age, they are living to 12-15 years, and are kept in a geriatric mob for their twilight days.

When those end, they are buried on the farm and a tree is planted on top of them.

Dr Bray said the quality of wool from the older sheep does not deteriorate.

“I track wool year to year, and the fibre gets a little bit shorter; that’s the only change.”

Based on the Glen Stuart genetics and the attributes of her land and management, Dr Bray knew she could grow high-value wool, as proven through auction results, and direct sales to buyers in Europe.

One was The Schneider Group, and Dr Bray was among a group of growers it invited to tour its facilities in Italy.

The trip gave her an insight into processing at a time when she was looking for an alternative selling arrangement.

Conversations with local knitters and Tasmanian retailers with a focus on tourism put her on to the idea of producing craft wool.

“The first thing tourists were asking was: Do you have Tasmanian wool I can buy? The answer was ‘no’.”

Dr Bray then started to investigate options for processing her clip into fibre and yarn, and pricing it. 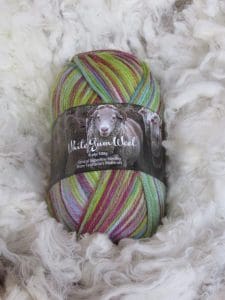 “I looked at yarn being spun in Italy and thought: ‘This is as good as that, and the story’s better’.”

Dr Bray set her price by looking for a 100pc margin on her cost of producing the wool, and the yarn landed in Australia, and has achieved that.

“A 100pc margin in textiles is a pretty good margin.”

“Mostly to start with it was direct sales, and fairly quickly shops and independent hand dyers asked if they could buy wholesale.

“That’s probably 80pc of what I sell by volume, and 20pc is retail through the White Gum Wool website.”

She has around 20 stockists in Australia, and a few overseas but mostly Australian online customers.

“I needed some way to get up the supply chain far enough to allow me to make a margin.

“Knitting yarn was a good place to pause.”

“It’s mostly been word of mouth through the knitting fraternity.”

Dr Bray set out being “absolutely determined” to turn her fleece into yarn in Australia, but she said her search for early-stage processing came at a time when onshore options were shrinking.

This was based partly on Australian Wool International’s decision to support offshore processing.

Only her first clip was scoured in Australia, and in 2012 she started her ongoing relationship with Canterbury Woolscours at Timaru in New Zealand.

Through Bendigo Woollen Mills, Dr Bray got on to Design Spun, a contract spinning and dyeing company in Napier, New Zealand.

“They work with relatively small producers; I generate maybe 1500kg of scoured a wool in five different spins, and they’ll do down to a 300kg spin.”

“I’ve got a very short supply chain and I can rely on everyone.”

In the New England region of New South Wales, Nick and Kylie Bradford’s Nundle Woollen Mill hears from a handful of customers each year asking if their wool comes from non-mulesed sheep.

In coming years, that will be the case on its all-Australian line, which uses greasy wool of around 21-22 micron from Elsdon, the Youl family’s property at Perth in Tasmania.

“They have just announced that they will not be including mulesing when they mark next month,” Mr Bradford said.

The Elsdon wool is washed at EP Robinson in Geelong and spun and dyed at Nundle.

“It gives us a spongy yarn and a drape that holds its shape.” Nundle Woollen Mill’s other class of product uses Australian wool bought on the auction floor and processed in China because what it offers cannot be found onshore.

“There’s no dye-house in Australia that can do multi-colour dyeing.”

Mr Bradford said demand for both lines is strong.

“We’re tracking about 50pc up on pre-COVID times.

“There have been some horrendous losers during the COVID pandemic, and craft is not one of them.”

He said the average age of the mill’s client base has fallen noticeably during COVID, and overseas demand has increased.

“Our customer base is about three times bigger than it was pre-COVID.”

“It’s the Australian-made factor; there is a renewed love and appreciation for Australian made.”

Mr Bradford said while Nundle Woollen Mill was able to up its production during COVID, problems in offshore supply chains impacted Australia’s major yarn retailers, and this may have pushed some business to independent outlets like theirs.

Extended ordering meant the Bradfords encountered no problems with their service provider in China during the peak of COVID, and reflects Mr Bradford’s experience in the industry which came from studies in textile marketing and a 15-year trading career with Itochu Wool.

“In total, we’re producing upward of 10 tonnes of wool a year, including for home spinners and dyers.”

They have recently installed a new machine made in Japan to knit apparel and blankets to launch the Knitted at Nundle line and further value-add Australian wool.

The Bradfords set up the mill in 1999 as a joint venture with a Tamworth couple who had bought machines, primarily from Geelong company JL McGregor when it closed in the 1990s.

Nundle Woollen Mills is heavily involved with Tourism Tamworth and Tourism NSW, which brings traffic to the mill and adjoining shop, and is also bumping up its social media presence to bolster online sales.

Bendigo Woollen Mills (BWM) is Australia’s biggest yarn producer by far, and spins around 180t of carded wool per annum.

It is grown, spun, dyed and packaged in Australia, but travels to China and back for scouring and topmaking.

“We have been using the same company for many years as there is no longer anyone in the country that has the expertise or equipment to do this step,” BWM general manager Kai Crosson said.

The company uses a broker that travels to wool auctions and purchases greasy wool of the types needed to produce its wide range of lines based on fleece of 16-29 micron. Sales of wool for crafting surged during COVID and have widened customer bases for yarn made from Australian wool. Photo: Bendigo Woollen Mills

Non-mulesed is not part of its metric, but Ms Crosson said an increased number of people was interested in the provenance of product, and whether it was coming from ethical and sustainable sources.

“Our broker is purchasing the best quality wool that meets our specifications.

“The best quality wool is going to come from the sheep that are the best taken care of.”

“I believe it’s due in part to COVID.

“We had record sales in 2020 and 2021 as people were forced to stay at home, and I think our sales are higher than 2019 as quite a few of the people who took up yarn craft during COVID are still crafting.”

The company has some overseas customers, and its factory shop accounts for around 10pc of its sales.

“It’s not unknown to see Queensland, NSW, South Australian and Victorian number-plated cars all in the car park at once.

“A lot of our customers who are now in their grey nomad years will stop by as part of their travels.

“Our online sales are growing as well, particularly over the past few years with people more willing to shop online.”