No lamb supply relief expected till late April-May without rain 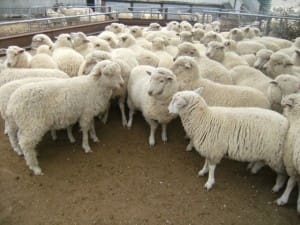 Most lamb prices held firm at or just below 500c/kg across Australia mid-week, although restocker rates continued to lose ground.

Saleyard lamb offerings fell at all centres mid-week, except at Carcoar, but fewer producers relying on paddock feed are now able to hold lambs to ride out the recent price slump as seasonal conditions continue to decline.

Many producers on the east coast are turning off shorn or restocked lambs due to age, weight and finances, or as pasture, summer crops or stubbles fail or locusts hit reserves.

At Hamilton LMB Linke director Terry McMeel said many producers in the region are turning lambs off as most summer crops are “gone”.

“I reckon more people have gone to spring lambing chasing higher percentages, so there are more lambs coming through a bit under-done and not mature enough to finish.

“Now we get to this time of the year and they are coming back onto the market, either their own lambs or from restockers, and the market is jammed,” he said.

“I reckon it will stay the same until May at least.”

After Thursday saleyard sales, the National Livestock Reporting Service quoted its carcase weight Eastern States Daily Indicator for restocker lambs as falling five cents to 488c/kg. The other ESDIs for lamb are: Merino 422c/kg, no change; trade 495c/kg, no change, and heavy lambs 500c/kg, up one cent. The national trade lamb indicator closed firm on 497c/kg and the heavy lamb indice finished on 501c/kg, up one cent.

The ES mutton indicator closed at 317c/kg, down one cent, and the national indice is at 316c/kg, a fall of one cent.

Central Tabelands “as dry as chips”

Ray White Emms Mooney director Ben Emms at Carcoar said despite Carcoar’s lift in lamb numbers on Wednesday (up 2000), the turn-off was normal for this time of the year.

The lamb market was solid coming off a soft week, he said, with better trade lambs on Tuesday making 480-500cv/kg cwt. But the Central Tabelands is “as dry as chips” and had dried out in the past month after a good summer.

“Now it looks like we are going to end up with a pretty tough winter.”

Some secondary lambs are starting to come into the market, but generally the good lambs are “pretty good.

“You would think good lambs might get hard enough to find on the tablelands going forward if it doesn’t break shortly.”

Just a few restockers were putting lambs away, he said.

“But it is certainly nothing like it was a month ago when there were heaps of people enquiring every week about getting store lambs – it has softened off a fair bit.”

Mr Emms said if there was no rain into April more producers would turn off lambs.

“We really are dependent on oat crops to fatten lambs in the winter to a large degree and if we get towards the end of April and we haven’t had a decent break then people will start to just get out of them.”

Delta Ag Livestock manager and auctioneer at Wagga Aaron Mackay said the 5000-lamb drop in numbers this week was normal and due to producers having to sell lambs due to the season or lambs being finished and ready.

“We had some very good lamb — the quality of the top-end lambs in Wagga has been very good.”

He expected to see some big lamb yardings in Wagga 2-3 weeks after Easter when lambs bought before just before Christmas will be ready and prices are expected to be better.

“The market was all pretty healthy this week – as good a sale or even better than last week.”

But he said when prices were higher mid-summer after good rains and there was a lot of feed, producers and agents got complacent.

“We just took our foot off the pedal a bit when we should have been selling lambs back in January and early February.’

In NSW, at the Central Tablelands Livestock Exchange at Carcoar on Wednesday, the agents yarded 9900 lambs, 2000 more than last week, and 4500 sheep, 3300 fewer.

The NLRS said it was a plainer quality yarding, though there were some good pens of trade and heavy weight lambs.

Heavy weight lambs were firm to $2 dearer compared to the previous week’s cheaper market. Over 22kg 4 score lambs sold from $108-$156 to average 484c/kg cwt. Limited numbers of Merino lambs were cheaper with trade weights selling from $61-$82. Hoggets sold to $100.

The NLRS said quality was mixed over the trade weight categories, with plenty of lambs presenting dry in the wool. Trade lambs were in short supply with well-finished shorn lambs keenly sought. The market fluctuated at times for trade lambs, particularly for longer-wool dry types. Heavy lambs made up a significant portion of the offering and sold to strong demand.

The usual domestic and export buyers attended, but not all operated fully. Bidding strengthened as the market progressed for well-finished heavy trade lambs, which was aided by stronger demand from a major domestic buyer.

The bulk of the heavy trade lambs lifted $5 to average 536c/kg cwt, reaching a top price of $136.20. The better shaped trade lambs, 18-22kg cwt, were keenly sought by most domestic processors and averaged $117.40. Light weight plain lambs to the processors sold to weaker demand with prices $2-$3 cheaper. Well-bred secondary lambs to turn out made from $92-$104.

Heavy export lambs were well-supplied and once again there were good numbers of lambs weighing more than 30kg cwt. Competition was stronger due to increased northern competition over all weight categories. Heavy lambs made from $133-$143 to average 538c/kg cwt. The bulk of the extra heavy lambs sold from $138-$178, averaging 508c/kg.

Mutton quality was mixed, with all weights and grades represented. Merino ewes suitable for the trade were unchanged, selling from $64-$103. Heavy ewe sheep were in limited numbers and demand was steady with prices similar to the previous sale. Heavy Merino wethers made from $97-$110 to average 372c/kg cwt.

In Victoria at the Hamilton saleyards on Wednesday, the agents yarded 11,115 lambs, 4176 fewer than last week.

The NLRS said the yarding contained good quality drafts of medium trade lambs, with only a few pens of heavy weight lambs. About 20 percent of the yarding were lighter 1 and 2 scores.

The number of buyers operating was down on previous sales, but an extra couple of store buyers helped lift prices for lighter lambs $2-$5. There was less competition on the medium trade and heavier trade lambs, resulting in an overall cheaper trend of $3-$4.

The NLRS said heavy trade and heavy lambs were best supplied. Secondary lambs made up the majority of the lighter trade weights and light lambs. Restocking activity was limited and most of the light lambs went to processors. All the usual buyers operated in a cheaper market.

At the Hamilton saleyards on Thursday, the agents yarded 5381 sheep, 3316 fewer than last week.

The plainer quality yarding contained limited numbers of heavy sheep, with most in the medium to light weight classes. Restockers only purchased one pen of Suffolk ewes for $126, topping the sale. The usual buyers showed no real urgency to obtain numbers and some heavier sheep processors did not operate. Despite this, light sheep sold firm to $2 dearer, medium mutton was up $2-$4 and heavier sheep made $6-$8 more. Light weight 1 and 2 score sheep sold from $35-$68, while the medium 18-24kg 2 and 3 scores made from $68-$90, averaging around 335c/kg cwt.

The NLRS said the usual trade and processor buyers were present, but not all operated and the small yarding attracted limited restocker interest. Prices fluctuated across the market.

Katanning competition solid despite no exporters

The NLRS said competition was solid from a depleted field of buyers, with no live exporters operating.

Mutton quality was better with a greater selection of very heavy ewes that sold up to $10 dearer. But the store and light weight ewe drafts were of plainer quality and sold firm.