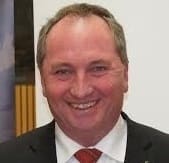 MINISTER for Agriculture Barnaby Joyce has indicated he will take no action over Australian Wool Innovation chairman Wal Merriman’s admissions in Senate Estimates of breaching AWI’s Code of Conduct and damaging the body’s standing.

However, wool grower groups are variously calling for Mr Merriman to stand down, for Mr Joyce to initiate an inquiry and for AWI board improvements in governance, transparency and accountability to growers.

A spokesperson for Mr Joyce said the Coalition Government’s priority is to work with farmers and wool industry bodies such as AWI to maximise the returns for wool growers at the farmgate.

“AWI is owned by more than 23,000 levy payers registered as AWI shareholders and as such is directly accountable to them.

“Wool growers will be able to put any questions they have to the AWI board and chief executive at the annual general meeting on 17 November,” the spokesperson said.

The AWI board must listen to the views and priorities of its wool grower levy payers.

“All interested woolgrowers are encouraged to attend the AGM and have their say.”

However, WoolProducers Australia is calling on AWI to improve its governance, including transparency and accountability to wool growers.

WPA’s chief executive officer Jo hall said there were a number of concerning matters raised by the Senators relating to AWI’s processes regarding the director election process from the initial Board Nomination Committee through to the allocation of proxies.

“It was revealed, amongst other things that the chair receives an enormous amount of proxies and does not have to declare where he allocates undirected proxies.

“WoolProducers does not believe that there is adequate transparency or accountability in this process and calls on AWI to rectify these issues immediately,” she said.

Mrs Hall said WoolProducers would wait on the outcome of the next AWI board meeting, which will consider Mr Merriman’s admission at the Senate Estimates hearing that he breached AWI’s code of Conduct and damaged the standing of AWI.

“AWI says that levy payers have the power to direct the company; however, the reality is under the current industry structure, voting in biennial director elections or the triennial WoolPoll are the only meaningful way to direct the company, which is neither agile nor timely enough for woolgrowers paying a compulsory levy.”

“These latest claims follow the revelations in the February Senate Estimates that AWI had made ex gratia payments to former staff that were well above both the National Employment Standards and the Australian Public Service,” she said.

“These payments were additional to the obligatory accrued leave and notice periods required.”

Ms Hall said as an industry-owned, grower-funded body, if wool growers are not happy with how their company is working for them, they must make their views known at the current election.

Ms Hall said WPA board is currently considering the candidates for the AWI board election and who will be endorsed.

”We will endorse candidates who we believe will deliver the best for wool growers in these important positions.”

Australian Wool Growers Association chairman Robert McBride said wool growers were at their “wit’s end” after Senate Estimates evidence about Mr Merriman’s behaviour and his admission that he could hold up to half the votes in an AWI election as proxies.

“It is time for Wal to move on – wool growers have had enough.”

Mr McBride said it appeared that the procedural difficulties board nominees faced in getting 100 signatures of registered AWI shareholders and the selection process for AWI board nomination committee members had helped keep Mr Merriman in power at AWI.

Mr McBride supported the contention of the Senate Rural and Regional Affairs and Transport Legislation Committee chairman Barry O’Sullivan that Mr Merriman should decline proxies and the AWI board should ensure that board members will not ever, in the future receive proxies to apply in a free election for a board member.

“He should stand aside from those and maybe distribute them proportionally to the other members, therefore allowing the wool growers of Australia to vote in the board they want, rather than him being rightly or wrongly accused of gerrymandering his position.

“Clearly a lot of wool growers have had enough,” Mr McBride said.

Wool growers happy with the way the industry was progressing, but issues that needed addressing included genomics and the mulesing debate, he said.

“The election is the first step in getting a functional board working for the benefit of wool growers.”

Mr McBride said wool growers should give board candidate Don Macdonald “a chance” and re-elect current AWI director Paul Cocking, rather than the AWI recommended candidates Will Wilson, James Morgan and Colette Garnsey.

“Barnaby Joyce should intervene at this juncture in time – there is enough smoke from different components of our industry that an investigation should be undertaken into AWI election process, including the selection criteria for the AWI board nomination committee.”