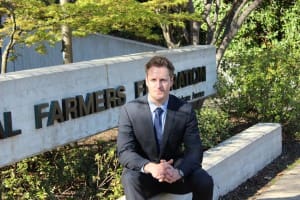 In this role, he developed and executed food strategies in Australia, New Zealand, China, Vietnam and Indonesia. Prior to working for Mondelēz International, he worked in corporate affairs and sustainability for mining, forestry, construction and consultancy fields.

Mr Talbot comes from a farming background and he and his wife run a Murray Grey stud in northern Tasmania, as well as holding other interests in the agricultural and food export sector.

“On behalf of the NFF Board, Members’ Council and NFF Secretariat, I am delighted to welcome Simon and look forward to him joining the organisation on 20 October 2014,” Mr Finlay said.

Married with four children, Mr Talbot takes over from Matt Linnegar who filled the CEO position for the past three years.

“I thank Brent and the NFF Board for their confidence and I look forward to working with the members and the small but extremely talented team at the NFF,” Mr Talbot said.

“I am joining the NFF at an exciting time for farm sector representation, and I look forward to working with members and, more broadly, the agricultural sector.

“The NFF is a strong brand which is highly respected, and I look forward to building on current work to streamline and strengthen the voice of Australian agriculture,” Mr Talbot said.

Mr Talbot possesses a Bachelor of Science and was the dux of his MBA course specialising in organisational strategy. These qualifications have enabled him to work in over seven countries across diverse issues from indigenous rights, corporate branding, through to critical incident management and sustainable agricultural systems.

NFF General Manager of Policy Tony Mahar will continue in the position of Acting NFF CEO until Mr Talbot commences the role on Monday 20 October 2014.