New Zealand to ban mulesing as Australian option is commercialised 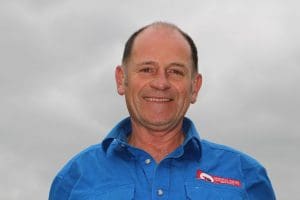 COMMERCIALISATION of an effective alternative to the surgical mulesing of sheep next year and a New Zealand ban next month could accelerate the phasing out of the practice in Australia.

Australia’s latest non-surgical alternative to surgical mulesing will be available to sheep producers in 2019, according to its developer.

Victorian veterinarian John Steinfort said the cryogenic breeching process he has developed over the past nine years is an effective alternative to surgical mulesing.

The process involving applying liquid nitrogen to the breech area of sheep is in a pre-commercialisation stage, and comes as New Zealand regulates to ban mulesing and tail-stripping from October 1 this year.

Dr Steinfort said his newly-developed cryogenic process is being refined for initial commercialisation to start in 2019.

“It’s been a nine-year development process involving the use of liquid nitrogen as a cryogenic agent to cryogenically contract skin around the breech.

“It is decreasing the wrinkle score on sheep to reduce the incidence of flystrike and to assist the shearing and crutching of the breech of wrinkled Merinos.”

Mulesing in Australia has had a chequered history; from its adoption as an effective strategy for flystrike prevention in the 1940s to recent activist and retail brand opposition, leading to the failed industry commit to ban the practice by 2010. Commercial wool trade and animal welfare pressure also led to the development of pain relief products and growth in wool accreditation and quality assurance schemes favouring non-mulesed wool production.

Recent unsuccessful alternatives to mulesing funded by Australian Wool Innovation, including wrinkle clips and Skin Traction have led to a stronger focus among sheep producers on selection and genetic solutions. AWI co-funded the early liquid nitrogen work, but Dr Steinfort has self-funded the development work over the past three years. 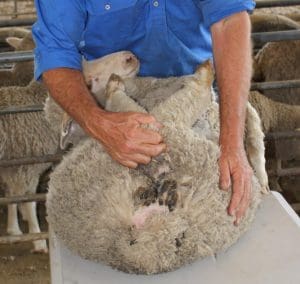 A lamb processed with the cryogenic breeching process.

Dr Steinfort said the cost-benefit analysis of his breeching process showed improvements in growth rate and wool production from its use, compared to the impact on sheep of surgical mulesing with pain relief.

He said the key Mokanger study done on-farm near Cavendish in Victoria in 2016-17 showed that the impact of the breeching process was similar to the lamb mark-only group.

“And the impact of mulesing with pain relief (Tri-Solfen) by a contractor in the same group of lambs was greater.”

The degree of effectiveness in preventing flystrike by using the breeching process is equivalent to a moderate mules, Dr Steinfort said. He said the “breakthrough” cryogenic breeching process’ method has improved application speed and mechanisation.

Dr Steinfort said there was a significant animal welfare benefit with his breeching process and a cost-benefit for producers to “switch” from surgical mulesing. He estimated the comparative cost benefit of the breeching process, as indicated by the Mokanger trials, showed it could return more than $20 a head when returned to mulesed sheep.

“That $20 per head production benefit, in addition to the ceased mulesing wool status, in itself will drive the uptake of the breeching process into the early commercialisation phase.”

Australia is believed to be the only country where surgical mulesing is still practiced, but Dr Steinfort believes the breeching process could have application wherever there were highly wrinkled sheep, including New Zealand, South Africa and South America. The breeching process’ commercialisation will involve the accreditation of contractors, equipment manufacture and procurement.

Confidence in ‘non-mulesed’ status of wool

Dr Steinfort believed wool from sheep processed with the cryogenic breeching method will be able to be sold as “non-mulesed,” but this will require ratification prior to commercialisation.

“We believed there will be significant value in using the breeching process with the sale of non-mulesed wool, especially Merino wools, into European countries and the United States and elsewhere.

“The definition of mulesing is the cutting of skin with shears, so this is not mulesing, so animals processed with the breeching process are non-mulesed,” he said.

“The fact that this has low animal impact and no open wounds, minimal chance of infections is a great breakthrough.”

Dr Steinfort said he now has an as yet unnamed strategic investor in the business to help with the certifying of contractors and the national uptake of the breeching process.

The Animal Justice Party’s Member of New South Wales Legislative Council Mark Pearson welcomed the NZ mulesing decision and believed it would add pressure for change in Australia. The MLC won unanimous support for a motion to the NSW Parliament in March 2016 for the state’s wool producers to provide pain relief when mulesing sheep and to breed for fly strike resistance.

“When the new government is formed in New South Wales, I will bring the issue back on, and probably in the form of a bill to amend the Prevention of Cruelty to Animals Act, to make it mandatory to apply pain relief and for mulesing to probably be phased out over a two-year period.”

Mr Pearson said it was very important that the cryogenic breeching process was being commercialised.

“I think it is a great thing that New Zealand has done this and I think it is certainly going to put pressure on the wool industry in Australia to really actually consider a date, a year, to get it all sorted, and tell the world it’s time to finish this mutilation of an animal.”

Cryogenic ‘premiums in the paddock’ at Cavendish

Cavendish wool grower Richard McShane said Dr Steinfort “breeched” 5200 Mokanger Merino lambs with the cryogenic process last year and it had enabled the flock’s wool to be accredited as non-mulesed under the National Wool Declaration process.

“It’s fantastic, but we are still in the development phase, so there is still more work to be done.

He believed the process would become more efficient as it was commercialised and Mokanger would still need to mules if it was not available, but the “premiums in the paddock” justified its use. Pain relief with “ breeching”was not used at Mokanger and he believed it was not required.

“Not doing something, at the moment, is not an option with our sheep, but this was far better (than mulesing).

“Aside from the pricing of it, to me it is far more ethical and more economical because the lamb will be bigger and have a bit more wool in the first 12 months,” he said.

Mr McShane said the ‘ceased mulesing’ price premiums for the Mokanger clip sold at auction more than paid for the cost of the cryogenic breeching process.

“They don’t get the setback associated with mulesing.”

Fines of up to $25,000 for NZ companies mulesing sheep

New Zealand will ban the surgical mulesing and tail-stripping of sheep after October 1 this year in a raft of regulations covering the treatment and management of farm and companion animal species.

Under the Animal Welfare (Care and Procedures) Regulations 2018, a person must not, by any method, remove the breech, tail skin folds, or tail skin wrinkles of a sheep. Failure to comply with the regulation could attract a conviction and fine of up to $5000 for an individual and up to $25,000 for a body corporate.

Ministry for Primary Industries (MPI) director for animal health and welfare, Dr Chris Rodwell, says the 45 new regulations cover a range of species and activities from stock transport and farm husbandry procedures to companion and working animals like dogs and horses.

“With under a month to go until these new regulations come into effect, we want to encourage people, who are responsible for any type of animal, to check they are up to date in how they are looking after them,” Dr Rodwell said.

One of the main changes is that the new regulations will be to make it easier for MPI and New Zealand’s Society for the Prevention of Cruelty to Animals to take action against animal mistreatment.

“These regulations will allow us to better respond to lower levels of offending, and target specific behaviours that need to change,” he said.

“If the Kiwis can do it, then why can’t the Australians?”

International wool processor Laurence Modiano said the New Zealand legislation raised the question: “If the Kiwis can do it, then why can’t the Australians?”

“And why don’t they mules Merino breeds in South Africa and all over South America?

“Why is Australia the last country to continue mulesing?” Mr Modiano asked.

“And at these record prices for wool, Australian growers have less of an argument to blame it on cost.”