New Zealand shearing and wool champions have a big weekend 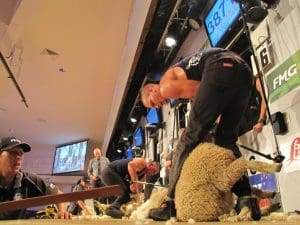 REIGNING Golden Shears and New Zealand Open shearing champion Rowland Smith continued on a relentless march in quest more of the top honours and a possible second world title when he won the Te Puke A and P Show’s open final on Saturday.

Completing a Hawke’s Bay clean sweep of the four titles at the show, it was 32-year-old Smith’s eighth win in a row in three weeks since resuming at Wairoa on January 19.

It took his career tally to 143 open wins, 43 of them in the two years since he cracked the century at the Counties Shears in February 2017.

It was his first win at Te Puke, meaning he has won open titles at 31 of the 59 shearing venues currently on the Shearing Sports New Zealand calendar. Sir David Fagan’s 642 open wins included victories at 25 of the current venues, and 26 where shearing competitions are no longer staged.

Hawke’s Bay–based Smith faced three Te Kuiti shearers in the bid for his fourth win in nine days and won by 2.66pts from Fagan’s son, Jack, the runner-up in a four-man final of 15 sheep each.

It needed the better quality points, after Smith was beaten to the finish by both the younger Fagan and first-man-off Digger Balme, who completed the job in 12min 42sec but ultimately had to settle for fourth place behind Smith, Fagan, and Mark Grainger, who had won the Tauranga show title by a similar margin from Fagan last month.

Napier shearer Ricci Stevens had his third win in his last season of senior shearing, Elsthorpe farmer had his second in the intermediate final, and Atawhai Hadfield, of Ruakituri, had his eighth win of the season in the junior final. 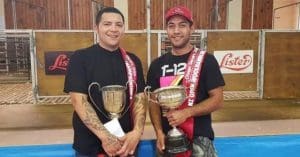 Meanwhile at the Otago Shears open final in Balclutha on Saturday, victorious Southland shearer Brett Roberts strengthened his hopes of a place among the elite at the Golden Shears next month.

The 24-year-old Roberts has completed a clean sweep of wins across the grades in Balclutha over the last 10 years and beat four national representatives in the 20-sheep final. Reigning world champion John Kirkpatrick was second and teams champion partner Nathan Stratford, of Invercargill was third. Fourth and fifth respectively were Troy Pyper, of Invercargill, and Wairarapa farmer David Buick, both national trans-Tasman series representatives.

Roberts’ win, by just over a point, came three weeks after his first A-grade open win, at the Northern Southland Community Shears near Lumsden.

He won two Golden Shears titles in Masterton, in the junior grade in 2010 and senior in 2014, but is yet to make the Shears’ Open semi-finals in four attempts for best placings of 15th in the Top 30 quarterfinal shoot-out last year and 27th in 2016. He just missed the cut on the other two occasions.

He has; however, the unprecedented record of having won in all four grades at Balclutha, now a total of six wins from the junior title in 2010, intermediate in 2011, the senior title three times consecutively in 2012, 2013, and 2014, and the latest triumph.

He has served the open-class apprenticeship patiently, reaching the 20-sheep final for the first time last year and finishing fifth, a pointer to yesterday’s win.

Having also had a win in good company at the West Otago show in November, he says ultimately it’s all about the big event in Masterton in three weeks’ time.

“I’ve been there every year since I was 13,” he said “I am preparing all season just for the Goldies.”

Another making a bee-line for the world championships is reigning wool handling champion Joel Henare, who at Balclutha won the New Zealand Woolhandler of the Year open title for a 10th time, and 5th time in a row.

Henare is favoured to win the Golden Shears title again, and a World Team Selection Series final on the same day.

The Otago championships were also a triumph for Southland-based Destiny Paikea, originally from Northland and who won the junior shearing final and was runner-up in the Woolhandler of the year junior final.

The Elers family from Mataura was also amongst it, with 2017 World Championships Cook Islands representative Maiden Elers winning the Senior Woolhandler of the Year title, Krome Elers the Junior title, and Nova Kumeroa Elers being runner-up in the South Island Woolhandling Circuit Senior final.

Meanwhile, the CP Wool New Zealand Shearing team of Buick and Stratford had a comfortable second test-match win over Wales.

Results from the Te Puke A and P Show Shears on Saturday, February 9, 2019

Results from the Otago Shears at Balclutha on Friday-Saturday February 8-9, 2019

Results from the Northern Wairoa A and P Show Shears at Arapohue on Saturday, February 9, 2019