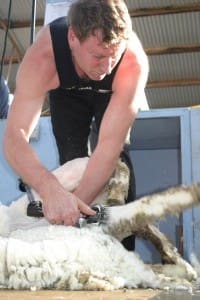 NEW Zealand shearers scored their third consecutive win over Wales in the CP Wool Shearing Series on the weekend.

The north-south island combo of shearer Dion King, from Hawke’s Bay, and Tony Coster, from Canterbury, guaranteed New Zealand’s CP Wool Shearing Series victory over Wales with a third-straight win at the Southern Shears in Gore on Saturday.

But it was an encouraging result from Welsh shearers Richard Jones and Gwion Evans, narrowing the margin to 3.667 points, the closest of the series and closer than either of the two tests shorn in New Zealand last summer.

Limiting his competition this season after buy a farm east of Masterton, King still dominated the test of 12 sheep each, as he had in the second test in Balclutha seven days earlier. He was the only one to shear under a minute a sheep, finishing in 11 minutes 55 seconds, beating his team mate by almost a sheep, and both Welshmen each having one more sheep to shear still in the pens.

The Kiwis had the best board-judging points, but Jones had markedly the better points in the pens afterwards.

King also helped North Island to a narrow win in an inter-island match, teaming with Napier shearer John Kirkpatrick and World champion Rowland Smith, who was otherwise the star of the show, winning both the Southern Shears Open final and a North Island-dominated South Island Shearer of the Year final.

Another feature was the large proportion of overseas shearers in the lower grade events — comprising almost half the 53 entrants in the Intermediate and Junior classes — with shearers from Wales, Northern Ireland, Scotland, Germany, Australia and Japan among the competitors.

South Australian shearer Tom Brewer from Naracoorte was one of the better-performing Aussies, placing fifth in the intermediate shearing final. But the young New Zealanders met the challenge, with the Senior final won by Dylan McGruddy, of Masterton, the Intermediate final by Napier-based Gisborne shearer Ricci Stevens, and the Junior by Brandon Maguire-Ratima, of Winton.

Results from the shearing at the 51st Southern Shears in Gore on Saturday, February 20: