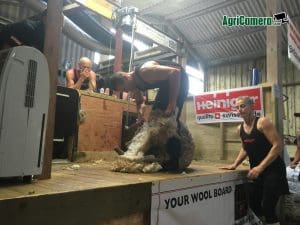 NEW Zealand shearer Matt Smith has this morning in England smashed the world solo nine-hour ewe shearing record with a new tally of 731.

It was the first world shearing record ever attempted in the Northern Hemisphere and eclipsed the previous record of 721 set by Hawke’s Bay gun shearer Rodney Sutton in a King Country woolshed in January 2007.

Smith averaged a sheep shorn every 44.32 seconds or 81.22 sheep per hour. The successful record attempt was streamed live by AgriCamera, attracting wide international attention, especially in the final seconds.

“The live feed crashed – we literally had too many logging in at the last second,” said AgriCamera sales manager Jeremy Perkins.

Smith, 32, grew-up around Ruawai in New Zealand’s Northland and had also been based in Hawke’s Bay before settling in England with wife Pippa, whom he married in 2014 St Clever Parish Church, near where the record took place at Trefranck Farm.

He had been a regular shearing in the Northern Hemisphere since the age of 17 and, having shorn an eight-hour record of 578 in Hawke’s Bay in 2010. He has long had sights on a record attempt in the UK, where he settled on a flock of Romney and crossbreds which would meet the requirements of the World Sheep Shearing Records Society.

The all-clear for the record was given only after the standard day-before wool-weigh in which 10 sample sheep shorn before the three judges, from New Zealand, Australia, and Wales, met the standard of an average of more than 3kg of wool per ewe.

The shearing started at 5am and finished at 5pm, a standard woolshed day including hour-long breaks for breakfast and lunch, and a half-hour each for morning and afternoon tea.

With brother, world champion and multiple Golden Shears and New Zealand champion Rowland Smith among the sizeable contingent of helpers, and needing an average of at under 44.9 seconds a sheep caught, shorn and dispatch, Smith was immediately ahead of the pace with 164 in the first two hours to breakfast.

It was three more than the previous two-hour run record of 161 shorn by Southland shearer Darin Forde when he shore a record of 720 in 1997, and three more than when Sutton struggled through the first two hours of his record 10 years later.

Smith wasn’t immediately available to comment as he was overwhelmed by the handshakes and embraces, but he had been preparing a long time, having initially planned to attempt the record a year ago.

Pippa Smith said her husband had been on a strict diet since returning from a stint shearing in New Zealand in mid-January.

“He had a low carb diet just because his body functions better; heaps of fish, chicken and venison, and veges.

“He had plenty of fluids on board too,” she said.

She said Smith had been doing big days and taking work wherever he could, but trained separately three days a week, and he had taken time-out to shear in competition, when he won the Royal Ulster Show All-Nations final at Balmoral, Belfast, in May.

Conditions in the area were ideal, cloudy with temperatures up to about 19deg, but still enough to test the physical endurance.

Monitored tests during one Merino shearing record in Australia in 2005 showed a shearer losing a litre of fluid an hour and 4kg in body mass during a day in which temperatures hit 30deg. 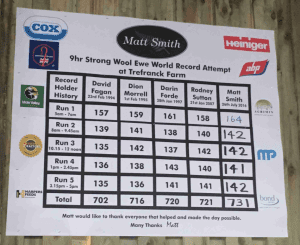