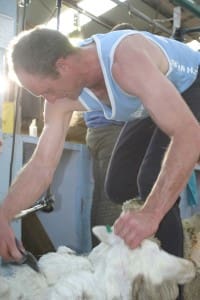 NEW Zealand’s southernmost city Invercargill will host the next world shearing and wool handling championships on February 9-11, 2017, for the first time.

The event, expected to attract competitors from about 30 countries, will be held at ILT Stadium Southland and will be known as Golden Shears World Championships Southland 2017.

The event is held every 2-4 years, and the championships in Invercargill will be the 17th, marking the 40th anniversary of the first, held in England in 1977.

At the 16th championships in Ireland last year, it was announced the event would be held in Christchurch.

The new location has been confirmed in an announcement by new Shearing Sports New Zealand chairman David Fagan and fellow former major title winner Tom Wilson, chairman of the New Zealand Shearing Foundation, a trust formed to manage revenue from the event.

Sponsorship and other funding is now being sought with the cost of staging the championships like to be several hundred thousand dollars, Mr Fagan said.

They said that the facilities in Invercargill will be possibly the best in the world for the event, and there is a “huge groundswell” of support from the Invercargill City Council, other local bodies in the area, and rural Southland, which already hosts three of the major events on the Shearing Sports New Zealand calendar each summer.

The venue, already known as a significant indoor sports stadium, will hold 7-8000 people, which organisers hope will be attracted to the major titles showdowns, the individual and teams machine shearing, blades shearing and wool handling finals.

The world championships have been held in Masterton four times, but the 2017 championships will be the first in the South Island.