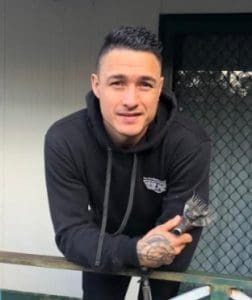 NEW ZEALAND-BORN shearer Lou Brown has put in the quickest-ever day of Merino shearing to smash a world record which has withstood at least four other attempts since it was set 16 years ago.

The 31-year-old Brown, based in Bunbury, south of Perth, but raised in Napier till he crossed the Tasman at the age of 13, shore 497 merino ewes in eight hours in a wool shed near Kojonup in West Australia on Saturday.

At just under 58 seconds a sheep, when no-one previously in a day’s record shearing had averaged under a minute on Merino ewes or wethers, Brown managed 31 more sheep than the previous record of 466 set by fellow Kiwi Cartwright Terry in a two-stand record with brother Michael James Terry in 2003, also in West Australia. 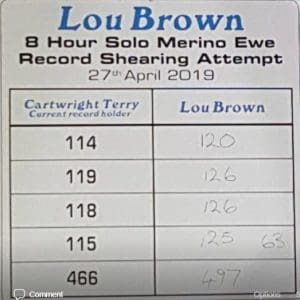 His tally was also just 33 shy of New Zealand shearer Stacey Te Huia’s nine-hour record of 530 set in New South Wales four years ago and regarded as one of the greatest tally shears in Australian woolshed history.

Another prominent in the staging of the record was Dwayne Black, who holds the eight hours Merino lamb shearing record of 570 and the nine-hours record of 664, both set in 2004.

The standard of shearing was monitored by an international panel of four judges appointed by the World Sheep Shearing Records Society, headed by Northern Hawke’s Bay farmer Bart Hadfield, who will also judge at the world shearing and wool handling championships in France in July.

The Lojik Shearing Training Video of Lou Brown in action