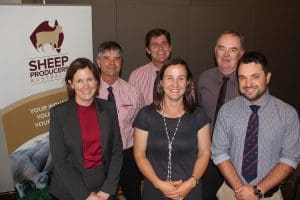 SHEEP Producers Australia is looking for a new chief executive officer after veterinarian Dr Kat Giles resigned after overseeing the body’s transition from its Sheepmeat Council of Australia origins.

Dr Giles has served as SCA CEO for four years, including its transition into a new company structure as Sheep Producers of Australia in Perth last week.

Former SCA vice president Allan Piggott was elected SCA president and said today Dr Giles is moving back to her home state of South Australia with her husband and young family and would be taking on a role in government following the move.

Dr Giles finishes at SPA next month. Mr Piggott said the organisation was seeking to recruit this week for an independent executive chair to fill the CEO position on a temporary basis, and commence recruitment for a new CEO in the New Year.

“We are disappointed that Kat won’t be continuing with Sheep Producers Australia and leading us into the new era of sheep industry leadership and representation that started last week, however we wish her all the best in a career in her home state,” he said.

“Kat has made some major achievements for the industry including reforming the peak industry body’s governance and operational structures, China free trade agreement, Ovine Johnes Disease management reform, and the development of the Sheep Industry Strategy Plan 2020.

“Her commitment, dedication and passion for the organisation and industry has been phenomenal and we acknowledge her efforts and thank her,” Mr Piggott said.

Mr Piggott said Dr Giles would still be involved in agriculture, starting in the New Year as director, of regional services with Primary Industries and Regions South Australia.

Dr Giles said after nearly seven years with the SCA as policy officer and CEO, it was a difficult decision to leave.

“Moving back to South Australia has always been on the radar, so I am excited for the future ahead for my family, but I also look forward to maintaining the connections I have in the red meat sector and to continuing to work in regional development and agriculture,” she said.

“Last week was a huge turning point for sheep industry advocacy in Australia and it was an honour to be part of such a transition.

“I would like to thank everyone who has been part of that journey and wish the organisation every success for the future,” Dr Giles said.