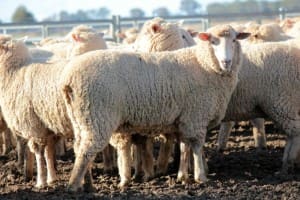 The National Livestock Reporting Service quoted its Eastern States Daily Indicators for all lamb categories as firm or higher after Friday’s saleyard sales, with most recording big increases over the week.

The ESDI for mutton lost two cents to close at 374c/kg, down 10 cents for the week, while the national indice finished on 370c/kg, down two cents.

AuctionsPlus market operations officer Anna Adams said sheep numbers were back 8000 to 24,589 last week, though she expected numbers to increase significantly in the next few weeks as more store lambs started hitting the market.

“First cross ewes were the stand-out article this week with lambs selling from $100.50 to a top of $195 for well-grown lambs with a full jacket out of Temora, NSW.

Merino wether lambs were well-supported, selling from $55-$95 and averaging $72.

“The top price was paid for a line of Tara Park blood grown lambs weighing 44kg and just a month off shears.

The NLRS said lamb quality was fair, with good numbers of well-finished and grain-assisted lambs, along with the plainer types. The usual buyers competed in a dearer market. There were 650 new season lambs penned and quality was good.

The NLRS said it was small and plain winter yarding, dominated by small pen lots of old season lambs as final drafts were cleaned out. Processor competition was limited to a just a couple of regular buyers. A major exporter that usually operates was absent. The market was patchy and cheaper than a week ago, with mixed quality, low numbers and limited buying field all factors in the outcome. Odd pens were passed in.

The bulk of the lamb offering comprised secondary light weight lambs which recorded varied price results. Most sales ranged from $70-$115, with a line of small recently shorn Merino lambs making $30-$55.

The few pens of better finished trade and export weight lambs sold from $125-$162. Included in this was one pen of new season lambs, estimated at about 23kg cwt, which sold for $138. Later in the sale a line of lighter young lambs sold to a local restocker for $108. Most better quality lambs made 540-570c/kg cwt.