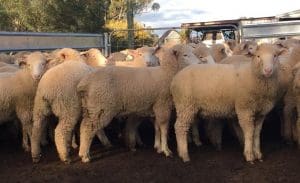 The National Livestock Reporting Service quoted prices for young trade lambs as up to $8-$12 cheaper at Dubbo, Tamworth and Inverell, and slightly weaker at Corowa, due to weaker domestic demand, but firm at Forbes.

The NLRS said it was a fair quality yarding with a pretty good selection of new season and trade weight old lambs. There was a reasonable number of heavy weights, but fewer extra heavy weights. Lightweight lambs sold firm to processors, with the 12-18kg cwt 2 scores making $69-$106. The trade weight new season lambs were $8-$10 cheaper at $114-$144, averaging around 590-610c/kg cwt. Heavy new season lambs sold to $156.

New season trade weight lamb sold to weaker demand and prices were back slightly. The better 22-24kg lambs made $121-$160.

It was a good quality offering of sheep, with quite a few excellent pens of heavy ewes. All the usual buyers attended and competition was strong. Heavy weight Merino ewes sold to $130 and heavy crossbred ewes made to $137. Hoggets made to $136.

At the Tamworth saleyards on Monday, the agents yarded 3000 lambs, and 500 sheep, 100 fewer than last week.

The NLRS said lamb quality was generally good, with most in good condition. There was a fair selection of new season lambs, and trade and heavy old lambs were well-supplied. The usual buyers attended.

Demand was not as strong, reportedly due a fall in some abattoir grid prices. The reduced demand resulted in cheaper trends for trade and heavy weights. Young lambs sold $10-$12 cheaper to processors, while restocker lambs remained firm. Trade weight old lambs sold to a cheaper trend, down $4-$9. Heavy old lambs lost $10-$17.

Competition was strong for sheep, with prices generally firm. Some higher weight-related prices were paid.

The NLRS said all agents led their sales with young lambs and the old lamb offering comprised tail-end drafts of very mixed quality. The usual buyers attended, but export demand for heavy lambs was fairly subdued and at least one company did not buy.

Bidding for young lambs weakened again, with most sales $5-$10 below last week’s rates. Heavy young lambs over 24kg were the most affected, with the major domestic buyers no longer pushing into bigger lambs now there is a more abundant supply of trade weight types. The limited supply of heavy young lambs, 25-28kg cwt, sold from $152-$167. The main drafts of young trade weight lambs fitting domestic specifications sold from $134-$146. On a carcase basis, a range of 560-620c covered most sales, although it should be noted that only the neatest medium weight pens commanded over 600c/kg.

Pens of lighter weight young lambs mostly made from $91-$125, with local agents purchasing some for $91-$98 for restockers. The quality of the old lambs was very mixed and buyers picked through the offering, paying firm to slightly dearer prices for the best of the trade weights, but continuing to discount secondary pens. Heavy old lambs sold to $160.

Demand for mutton was very strong and prices were firm to dearer, underpinned by the small yarding. Extra heavy crossbred ewes made $110-$128, with local agents purchasing some ewes to re-join. Some good lines of bare shorn Merino ewes in good condition sold from $90-$125, or 390-400c/kg.

The NLRS said lamb quality was average to plain, with many clean-up pens of old lambs and a few new season drafts offered to most of the usual buyers.

At the South Australian Livestock Exchange at Dublin on Tuesday, the agents yarded 8688 lambs, 560 more than last week, and 2427 sheep, 502 fewer.

The NLRS said the usual trade and processor buyers attended, but not all were fully active. A large number of restocker buyers rounded out the large crowd. There was less weight and condition in the yarding then previous weeks and prices eased for most lambs.

The NLRS said the fewer new season lamb drafts were of lower quality and included more light weights. All the usual buyers operated, but there was a noticeable drop in competition and most categories eased $3-$7.

The old season lambs were of fairly mixed quality and met with more selective bidding. Light weight drafts made $48-$93, with the better drafts sold to processors and feeder making $70-$96 and firm to $7 back on last week. Trade and heavy weight old lambs sold from $83-$110 and were back $7, or close to a 470c/kg average.

Ewe weight and quality remained good, with some drafts carrying good wool length. Ewe prices were slightly back, with light weight ewes making $49-$57 and medium weight 2 score drafts $58-$81, down by close to $5. Better conditioned ewes, including the heavy weight drafts, made $65-$106, $1 easier. The fuller wool drafts had skin values of up to $20.

Restockers paid $75-$111 for younger ewes and $55-$105 for older drafts, depending on quality, weight and wool length. The wethers were purchased by the trade or export feeders at slightly easier prices. Heavy drafts made $80-$115 and were close to $4 back on last week. Lighter and store wethers made from $51-$90, also easier than recent sales. Rams continued to sell well to solid export orders. Ram lambs made $77-$106, with young drafts selling to export buyers for $50-$100. Old rams sold to processors for mostly $25-$69, though some very old rams made $5.

In Tasmania at the Powranna and Killafaddy saleyards on Tuesday, the agents yarded 530 lambs, 250 more than last week, and 190 sheep, 240 fewer.

The NLRS said the small numbers in many categories were not enough for accurate quotes. The old lamb season is coming to an end and young lambs are some months away, so quality is very mixed. Most prices were similar to last week, with butchers and wholesalers trying to get the best quality.