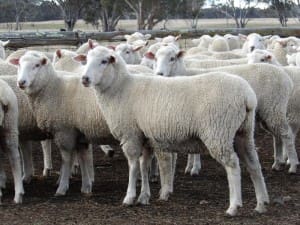 These Border Leicester-Dohne ewe lambs scanned 136pc in lamb to White Suffolks and sold for $187.50 on AuctionsPlus at Glen Innes, NSW, last week.

QUALITY new season lambs continued to sell around 600c/kg in New South Wales late last week, with suckers making up about 30 percent of the lamb yarding at Cowra on Friday.

The NLRS quoted its Eastern States Daily Lamb Indicators as mostly firm after Friday’s saleyard sales, although all indicators fell – from 9-19 cents – during the past week.

The mutton ESDI closed firm on 384 on Friday, but fell 8 cents for the week, and the national mutton indicator finished on 384c/kg, up 1 cent.

The trend of buyers looking to restock carried over into the crossbred ewes, with ewe lambs making $76-$187.50. The top-price of $187.50 was paid for 230 10-11 month-old February-shorn Border Leicester-Dohne cross ewes, scanned 136pc in lamb to White Suffolk rams.

A large offering of Merino wether lambs attracted buyer interest, with prices ranging from $56-$85 and averaging $69.50. The top priced lot was a line of 36kg lwt Stavely Park and Mt Yulong blood wethers, with a five cm skin from Cavendish, Victoria.

The NLRS said quality was very good for the 1900 new season lambs. The heavy old grades were also well-presented and there some lighter plainer lines. Mainly trade and heavy weight lambs were penned, with a limited number of stores. Competition was solid from all the usual buyers on the new season and heavy old lambs resulting in a dearer market.

Lamb quality declined slightly from the previous sale, although there were still some well-finished lambs. The usual buyers competed in a market that was firm to slightly dearer for the quality on offer. A few pens of well-finished new season lambs sold from $142-$152. Old light lambs made from $102-$112. Trade weights were firm to $2 dearer, at $114-$149. Heavy and extra heavy weight lambs sold firm to $3 better. Heavy lambs sold from $151-$158. Extra heavy weights made from $148-$197. Carcase prices ranged from 581-616c/kg.

The sheep were mostly Merinos and quality was again very mixed. Merino ewes sold from $80-$140. Crossbred ewes received from $94-$110.

In Victoria at the Shepparton saleyards on Friday, the agents yarded 720 lambs, 236 fewer than last week, and 441 sheep, 159 less.

The NLRS said apart from a few pens of supplementary-fed lambs, quality was generally of a very plain and mixed standard. One regular export buyer returned this week, supporting the top end of the slaughter market. However, due to the lack of numbers and quality it is not possible to quote price trends.

The number of lambs displaying good carcase weight and finish was very limited. Four pens of heavy lambs, weighing 26-28kg cwt, sold from $165-$169 and a pen of three extra heavy lambs topped the sale at $175. A few pens of better quality trade weight lambs sold from $122-$140. One pen of new season lambs, estimated at 24kg cwt with a $10 skin, sold for $130. The balance of the yarding was mainly secondary lambs lacking weight and fat cover which sold from $60-$90. In carcase terms, most slaughter lambs were estimated to range from 500-550c/kg, with odd sales of the better bred and finished types making to 590c/kg.

Numbers and quality were also limiting factors in the sheep sale. Heavy crossbred ewes sold from $112-$135.50, with the middle run of trade mutton making $70-$81.