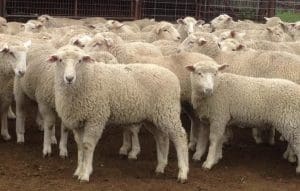 EARLY turn-off of new season lambs into saleyards and processors has started to ease in New South Wales after sharp price falls in saleyards in recent weeks.

Some lamb producers had been rushing lambs into saleyards, attracted by prices consistently over 600-650c/kg cwt, but this has been tempered by price drops of up to more than $20 for old season trade and heavy lambs in the past fortnight.

Mr Cabot said producers had been rushing in their new season drafts while prices were high.

“But they won’t do that anymore – your lighter suckers were $20 cheaper last week.”

Producers will now run on their new season lambs as normal into heavier weights, he said.

“They’ve got the feed to get them heavier, they just weren’t getting them heavy because they were getting paid not to – but that’s all changed, so they will just get them heavier again now.”

The ESDI and national mutton indicators lost 3 cents on Friday, closing at 387c/kg.

The NLRS said the quality of the lamb yarding was mixed, but there were plenty of new season drafts with weight and finish. Old lamb quality continues to be mixed and longer wool lambs are being discounted. The usual buyers attended, but not all operated fully.

Demand was subdued for old trade lambs with buyers picking their way through the tail-end of producer drafts. There were fewer heavy lambs and quality was very good.

All the usual buyers operated and competition was quite good, resulting in a generally firm market for the new season lambs. Old lambs suffered bigger price losses.

Light new season lambs sold to local restockers for $109-$115. Medium and heavy trade weight young lambs were firm to $1 dearer, averaging 630c/kg cwt. Most of the heavy trades sold from $130-$148. Heavy new season lambs were $3 easier and averaged 625c/kg. A pen of extra heavy weight young lambs with an estimated carcase weight of 27kg made $175.50.

In Victoria at the Shepparton saleyards on Friday, the agents yarded 700 lambs, 360 fewer than last week, and 230 sheep, 20 less.

The NLRS said it was another small and very plain winter yarding. Competition was restricted to a couple of regular buyers and there was insufficient numbers or quality to quote reliable lamb or sheep price trends. With more rain forecast, agents said they were not anticipating any numbers of new season lambs until next month.

The single pen of new season lambs were estimated at around 21kg cwt and sold for $149 to a local meat wholesaler $149 or 665c/kg, matching the best of the carcase rates for young lambs last week.

Old season lamb quality was very mixed and they were mostly clean-up lots of less than 10 head. A few pens of heavier lambs with reasonable fat cover sold from $128-$156. Heavy ewes sold from $85-$95 in the token selection of sheep.

AuctionsPlus said with widespread rainfall over winter, the fast approaching spring season is looking to be very favourable and hopefully bringing with it extra heavy lambs. The number of sheep and lambs offered online last week rose by 8380 head to 50, 696.