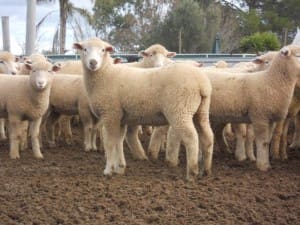 NEW season lambs are coming into NSW saleyards, with the mild season and recent rain helping crop, pasture and lamb growth, raising the prospect of an earlier turn-off in some areas.

This contrasts with the start of the new season lamb turn-off in SA, where lighter runs are being yarded in reaction to the tighter season and limited pasture growth.

“I think they will start to dribble in now, but we are a month to a month-and-a-half away from seeing some real runs.

“The buyers are looking for trade weight lambs and I don’t think there are enough about for them, looking at those prices,” Mr Armitage said.

“There will be a bit of pressure early.”

Landmark’s Rick Power at Cowra said parts of NSW might turn-off lambs earlier this year, due to the mild weather, with some lambs between Grenfell and Young already weaned and on crops.

“It has been very mild, we haven’t had it cold in the Tablelands yet.

“If the weather stays the same I would think you would see a good run of suckers well before the first week of August,” he said.

“Generally you say suckers need sunshine in the second week of August, but I think you will see them trickling in during the third week of July – the price is there.”

Some Forbes new season drafts up to two weeks earlier

“Normally you would only yard a pen or two before July.”

He said the season had not been outstanding, with February-drop new season lambs yarded from only two producers finishing lambs on irrigated Lucerne crops.

“It is a good sucker-growing season at the moment and I would expect by the middle of July we would be yarding 5000-10,000.”

Forbes district lamb producer Noel Pengilly at Eugowra said he always lambed some ewes down on February 1 onto irrigated lucerne and winter crops – oats and ryegrass. He will turn off 10,000-12,000 lambs annually.

“You wouldn’t get a better year for stock than this year, we’ve had rain and then it fines up with plenty of sunshine and that is all good for suckers.

“They are unbelievable – good prices.”

Elders auctioneer at Wagga, Joe Wilks, said a pen of 23kg cwt new season lambs made $153 or about 670c/kg to a domestic buyer in the centre last Thursday. Producers have been waiting for growth in oat crops to finish lambs.

“There is the odd pen coming into Wagga, but certainly no volume numbers and my advice is to keep them going – I want to get another three weeks out of them before I load up – ideally at supermarket weights 18-25kg, but you want them to average 23kg.

“They will come in a fraction earlier because of the price, but about the same time, in late July-early August.”

NLRS slaughter indicators on the move

After Tuesday saleyard sale, the NLRS quoted its national and Eastern State Daily Indicators for trade and heavy lambs as continuing to improve above 600c/kg, while mutton rates fell back.

The ESDI for mutton is back two cents to 404c/kg and the national indice fell similarly to 403c/kg.

The NLRS said it was a mixed quality yarding, with a large percentage of light weight lambs and good numbers of heavy weights, but limited runs of trade weights.

The NLRS said there was a good supply of lambs, with more heavy trade and heavy lines, and a few pens of light store lambs. Quality improved, with mainly crop and supplementary-finished lambs offered.

The yarding of mutton consisted of several lots of well-finished ewes and wethers off crop and carrying a good skin. The market was $5-$8 dearer. Medium weight Merino ewes made $87, up $8, while crossbreds sold to restockers at $88.60.

The NLRS said lamb quality was improved from the previous sale with more well-finished lambs. Most were heavy and extra heavy weight lambs. Extra buyers competed in a firm to dearer market.

The NLRS said there was a noticeable decline in quality, making it one of the smallest and plainest yardings this year. There were more Merino lambs and lines in plain fat score 1 and 2 condition. The usual buyers attended, but not all operated to capacity. Prices varied on quality.

The limited numbers of better finished trade and export lambs were mostly $2 to $8 dearer, although the neatest domestic lambs, 22-24kg cwt, gained up to $11. Secondary lambs lacking weight and fat cover were mostly $2-$3 cheaper. The market reached a top of $200 for a pen of export lambs estimated at 30kg cwt with a $10 skin.

There were several big runs of light weight Merino lambs. Restockers paid from $34-$66.60 for the smallest Merino lambs to grow-on, while processors generally paid from $72-$105, with a few pens of better trade weight types making to $122.20.

Domestic lamb buyers pushed into heavier weight lambs to access better carcase finish and quality, paying up to $179. Most of the lead runs of lambs, in fat score 3 to 4 condition, sold to domestic processors at $140-$176, or 615-630c/kg cwt. There was limited export competition, due partly to a lack of extra heavy lambs. Most heavy lambs to exporters made from $170-$188, with just the one pen at $200.

The NLRS said lamb quality was average, with more light and plainer types yarded. The usual buyers attended, but not all operated fully.

A very mixed quality yarding of crossbred and Merino lambs sold to fluctuating competition from the usual trade and processor buyers. The first light weight new seasons lambs were snapped up by trade buyers. Feeders were only occasional bidders and there was some limited interest from restockers on woolly Merinos.

The NLRS said more trade and processor buyers attended, but not all were fully active. Restockers purchased a small number and lamb prices were easier than last week.

The NLRS said there were reasonable supplies of trade weight lambs, but most were secondary and Merino drafts more suitable for restockers. Wether and ewe mutton supplies were limited. Not all of the regular processor buyers operated.

Live export orders were selective on wether lambs, wethers and rams. Prices held up reasonably well given the buyer activity, with restockers taking advantage of the easier market.

Ewe prices remained similar, but the limited numbers distorted quotes. Light weight and conditioned ewes made $39-$55. The 2 score mutton sold to processors for $55-$75 to be slightly firmer and averaging about 290c/kg cwt. Better conditioned and heavy weight Merino ewes sold from $72-$85, with crossbred ewes making to $90, similar to last week. Wether prices were close to equal with better export and heavy weight drafts making $80-$100. Lighter weight and store wethers sold to restockers and feeders for $50-$90, similar to last week. Ram lambs sold to processors for $70-$95. Young rams sold to live exporters and feeders for $30-$75. Old rams sold to processors for $30-$57, close to last week’s prices.