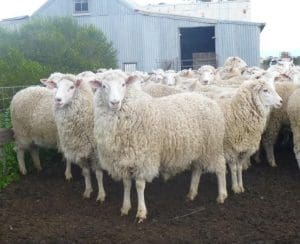 PRICES for new season lambs lifted by up to $20 in New South Wales late last week.

AuctionsPlus said there was a bigger transition last week from old lambs to more new season suckers hitting the market.

About 1500 new season lambs were yarded at the Cowra saleyards on Friday and there was a small number offered at the Griffith yards, underpinned by strong domestic and restocker competition.

The NLRS said the quality of the new season and heavy old lambs was very good. There were 1500 new season lambs yarded and they were mainly trade weights in top condition. The old grades were a little mixed, including being well-finished heavy lambs and plainer light weight lines.

All the buyers were operating and competition was very strong for the new season lambs, which experienced some larger gains. New season trade and heavy weight lambs sold $10-$20 dearer, averaging at 670-719c/kg cwt. The trade weights sold from $155-$167 and heavy weights made $159-$181.

Griffith’s trade and heavy lambs lift up to $5

The NLRS said lamb quality was similar, with some weather-affected, alongside well-finished trade and heavy lambs. The heavier end of the trade weights and heavy lambs were best-supplied with only a limited number of extra heavy lambs. A small consignment of new season lambs were offered. Not all the usual buyers operated in the dearer market.

Sheep quality was good. Prices were similar, with medium weights making $73-$102 and heavy crossbred ewes to $158. The better covered lines made 380-415c/kg.

After Friday’s saleyards sales, the National Livestock Reporting Service quoted the Eastern States Daily Indicators for the main slaughter lamb categories as generally firm. The lambs ESDIs, their daily and weekly changes are: restocker 617c/kg, up 6 cents, up 97c; Merino 551c/kg, down 8c, down 9c; light 564c/kg, down 1c, up 17c; trade 636c/kg, up 1c, up 29c; heavy 641c/kg, up 2c, up 18c. The national trade lamb indicator is up 1 cent on 637c/kg and the heavy lamb indice is up 2 cents to 641c/kg.

The ESDI for mutton closed down 1 cent on Friday to 386c/kg, up 2 cents for the week. The national mutton indicator is down 1 cent to 384c/kg.

Sheep and lamb numbers dropped 11,343 to 18,284 on AuctionsPlus last week, but with tightening supply, 92 percent of lots were cleared.

There was fierce competition from restockers for the fewer Merino ewes offered online. Young ewes averaged $117 and sold up to $170.50 for a small line of 84 20-26 month-old early-April shorn ewes at Deniliquin, New South Wales. The ewes weighed 58.8kg lwt, were mostly score 3, and scanned 100pc in lamb to White Suffolk rams.

A smaller offering of Merino wether lambs this week produced an average of $90, with the top line selling for $117.50. The 400 one year-old mid-May shorn Pastora blood wethers at West Wyalong, NSW, weighed 18.5kg cwt and were mostly score 3.

The number of first cross ewes dropped considerably on AuctionsPlus last week. A line 214 May-June drop ewe lambs at Mount Mercer in Victoria sold for $193.50. These weighed 46.2kg, were mostly score 2 and 3, and late December shorn.