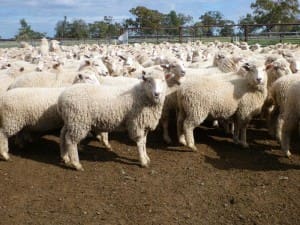 The National Livestock Reporting Service quoted trade weight, 18.1-22kg cwt, new season lambs at Forbes, Corowa, and Tamworth as selling consistently above 614c/kg cwt and up to 670c/kg, and lines above 22.1 kg also made better than 604c/kg at the centres.

Agents said buyers, led by the supermarkets, turned to NSW and SA saleyards on Monday and Tuesday for most of their supplies, due to the smaller offerings in Victoria.

About a third of Forbes lamb yarding was new season lambs this week with stock agent Luke Whitty attributing the lift in demand to low numbers in Victoria.

“Woolworths and Coles very strong and aggressive on the trade lambs, but the biggest factor is that there are not many lambs in Victoria and maybe a bit of wet weather around as well.”

Exporters were fairly strong down to 22kg, but not for lighter lambs, he said.

At Dubbo, new season lambs made up about 10pc of the yarding, but stock agent Angus Barlow said the suckers coming through now were sappy and coming off good crops about a month earlier.

“There is no real need to push them out the gate because there is plenty of feed in front of them, so things are looking pretty good.”

Mr Barlow said some companies might be coming to the end of their contracted lambs.

“I think we are seeing that and hopefully that might bounce the job a fair bit more in the next few weeks.”

Bendigo sucker numbers due end of August, but rain needed

Elders Bendigo livestock manager Nigel Starick said lamb buyers were discerning on quality in new season and old lamb lines. He said even very light suckers were making “huge money” with domestic buyers and supported by light lamb exporters. Some new season lambs were coming into Bendigo from the north, but the first main flush of district new season lambs was still about 3-4 weeks away.

“I reckon by the end of August that’s when we will start to seeing a few numbers.”

Many Bendigo district producers were planning to turn their first new season lambs off at around 21-22kg for 600c/kg, he said.

“If it is only a matter of three weeks to get them up to weight and it’s going to be similar money, I hope they can wait a little bit,” he said.

“But if they are ready to go now, they’re gone and we can look at doing something else if we do get a spring.”

Mr Starick said the region has had “a bit of rain”, but much more was needed for a good spring.

In Victoria, the over-the-hook rates were steady on week-ago levels, with the trade lamb indicator at 603c/kg cwt. Mutton indicators were also unchanged, as the medium weight category averaged 360c/kg cwt.

Tasmania’s OTH rates for lamb and mutton were quoted as unchanged. The Western Australian rates were unavailable when this report was published.

After Tuesday’s saleyard sales, the NLRS quoted its Eastern States Daily Indicators for trade and heavy lambs as up 6-7c/kg and good offerings of Merino lambs helped lift that indicator 12 cents.

The ESDI for mutton is on 378c/kg, down 1 cents and the national indicator finished on 377c/kg, down 2 cents.

The NLRS said it was a pretty good quality yarding, with a good selection of trade and heavy weight lambs, and some top runs of well-finished new season lambs and Merinos.

It was a mixed quality yarding of mutton. Light and medium weight sheep sold $2-$4 cheaper and the heavier weights were up to $9 easier. The 2 score ewes sold from $30-$78, while the better medium and heavy weights sold made $70-$130 for woolly Merinos and to $125 for crossbreds. Heavy weight Merino wethers sold from $104-$130.

The NLRS said lamb quality varied. There were good lines of heavy trade weights and light Merino lambs were in reasonable numbers. There were a few more pens of new season lambs but numbers still remain limited. Not all the usual buyers operated in a market where the better quality lambs were dearer. Secondary and Merino lambs were cheaper.

Mutton quality remained mixed, with some very heavy sheep and plainer Merinos yarded. Plainer sheep sold to a cheaper trend and the better covered 3 and 4 score mutton sold stronger. Medium weight ewes ranged from $74-$128, averaging around 360c/kg cwt. Heavy crossbreds reached $149 and the best of the Merino wethers made $129. The better covered sheep made 400-430c/kg cwt.

The NLRS said the quality of the lambs was mixed, comprising a good selection of trade weights and a fair supply of heavy weights. Quality and weights improved in some grades. The usual buyers attended and demand was stronger. Market trends were mostly dearer, but some secondary quality trade lambs struggled to maintain prices.

The small penning of sheep included some good quality lots of both ewes and wethers. Market trends were also dearer.

The NLRS said lamb quality was fair, with a good offering of well-finished lambs and some plainer types. Most were heavy and extra heavy weight lambs. The usual buyers competed in a dearer market. There were 8900 new season lambs were mostly in good condition and well-finished.

The sheep were mostly Merinos and quality was mixed. Prices remained strong, with Merino ewes selling from $82-$126. Crossbreds ranged from $78-$129. Merino wethers sold from $78-$147.

Bendigo trade lambs up to $9 dearer

The NLRS said lamb quality remained very mixed, reflecting the winter conditions. This was a factor in some of the varied price results. About 1000 new season young lambs were yarded.

The better presented pens of export and trade weight lambs were mostly unchanged to dearer in places, while secondary kill lambs under 16kg were generally cheaper. The market reached a top of $181 for heavy export lambs, while the best of the new season lambs off irrigation made to $160. A big line of heavy Merino lambs in a $20 skin, sold for $169.60. A good percentage of the yarding comprised light weight lambs in plain fat score 1 and 2 condition, which sold to processors for $50-$95. Odd pens of very small and secondary lambs sold down to $15.

Competition for trade weight lambs was solid, with crossbred lambs in the 20-22kg range recording the best price increase of the sale of up to $9. The general run of trade weight slaughter lambs sold from $114-$135, while heavier pens suiting supermarkets and other top-end domestic orders made from $140-$160. In carcase terms, the better quality kill lambs made 550-590c/kg, with just select pens over 600c/kg.

Sheep numbers remained similar amid reports the tough season has prompted some farmers to wean lambs early and sell old ewes. A good selection of recently shorn Merino and crossbred ewes was offered. Prices for heavy sheep remained similar to a week-ago, while plainer and lighter types trended cheaper. Heavy crossbred ewes sold from $90-$135. Restockers paid to $127 for young woolly Merino ewes to go back to the paddock and heavy Merino wethers sold to $126. Most mutton sales were within a range of 340-400c/kg cwt.

The NLRS said a plain to average yarding was offered to most of the usual buyers, although not all were fully active.

The NLRS said the generally better quality yarding of lambs sold to stronger competition from a full gallery of trade and processor buyers. The highlight of the sale was the demand for the estimated 2500 good quality new season lambs. Feeders and restockers operated only occasionally on mainly the light weight new season crossbreds and woolly Merinos.

At the Naracoorte saleyards on Tuesday, the agents yarded 1209 lambs and 592 sheep.

The NLRS said sheep and lamb quality varied from plain to good. The current buyers competed fully, while restockers were quiet or operated only moderately.

Prices lifted for all categories of wethers and ewes. Ewe prices lifted largely due to increased weight, with larger numbers of heavy 3 and 4 score ewes available. Light weight ewes made $36-$52 and the 2 score processor mutton from $45-$76. Heavy weight ewes sold from $75-$108, with most Merinos making $78-$102, or 306c/kg cwt. Restockers were active on younger drafts at $48-$98. Wether prices lifted slightly with increased feeder and restocker interest. Heavy export weight drafts made $80-$112 to processors and feeders and the lighter drafts went mostly to restockers at $67-$95 to be slightly dearer. Ram prices were driven by solid export demand and lifted around $5. Ram lambs sold to $111, with suitable young drafts to live exporters and feeders making $40-$85. Old rams sold to processors for $36-$55.