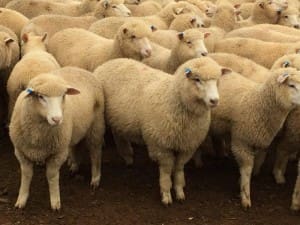 Enough good quality lambs continue to be offered at centres nationally despite the season and the new season lamb turn-off in south-west Victoria is gaining momentum at Hamilton.

Restocking interest in lambs remained strong in most centres, underpinning light and light trade weight prices, but not all trade and processor buyers operated in all centres.

The National Livestock Reporting Service said restockers paid $67-$109 and up to 667c/kg cwt for light lambs at Carcoar and they competed on all weights of store lines at Wagga, buying well-bred light second cross lambs for $90-$108.

NLRS lamb indicators on the move

The ESDI for mutton held firm at 333c/kg and the national indicator was unchanged on 330c/kg.

In New South Wales at the Central Tablelands Livestock Exchange at Carcoar on Wednesday, the agents yarded 6800 lambs, 700 fewer than last week, and 2300 sheep, 100 more.

The NLRS said it was a fair to good quality yarding, with some good lines of trade and heavy weight new season lambs and a fair percentage of stores. Most of the regular buyers operated.

The NLRS said lamb quality was quite good, with most being new season lines. The usual buyers attended, but not all major export processors operated across heavy categories.

Well-bred store lambs were well-supplied and restockers were active over all weights. Store orders were from Albury, Corowa, Cootamundra, Forbes, Dubbo and the local area. The reasonable number of new season trade lambs sold to irregular competition.

There were fewer heavy and extra heavy export lambs, and processors clashed for a market share. The stronger demand from a few export and domestic processors lifted prices $3-$5, to average 527c/kg.

The NLRS said lamb supply climbed as the turn-off of new season lines escalated. More top drafts were included in the yarding which were of very good quality and well-presented, despite the dry conditions. All weight ranges were represented.

A full gallery of processors, not all of which were operating fully, combined with extra restocker buyers from Northern Victoria and South Australia lifted light weight lambs $5-$10. Medium trade weights also lifted in price, up $2-$4, and the heavy 4 score lambs were $5-$8 dearer.

Hamilton lamb and sheep sales will be split from next week, with lamb sales on Wednesdays and the sheep sale on Thursdays.

The NLRS said lamb quality was average to good. Carcase weights remaining relatively good, but more lambs were showing dryness in the skins. Most of the regular buyers operated in a generally firm market, with lamb selling $1-$2 either side of last week’s levels.

Reasonable numbers of trade weight and heavy lambs were yarded and reached a market top of $146. Restockers were again active and paid mostly from $78-$95 and from $40-$68 for lighter lots, with restocker lambs selling similar to last week.

In South Australia at the Mt Gambier saleyards on Wednesday, the agents yarded 6270 lambs, 825 more than last week, and 112 sheep, 163 less.

In Western Australia at the Katanning saleyards on Wednesday, the agents yarded 8382 lambs, 3382 more than last week, and 10,307 sheep, 322 fewer than last week.

The NLRS said supply outstripped demand for trade and heavy lambs, with prices slipping $5. Heavy mutton sold to the trade also eased $3-$5, but the rest of the market stayed strong as increased feeder and restocker demand met pace with increased numbers and all store types sold firm.

Heavy lambs sold to $101, back $5-$8. Trade lambs were of good quality and the heavy types sold from $82-$100, while lighter trade weights sold from $74-$94. The light weights averaged $76 and airfreight types averaged $71. There was strong demand from feeders for light weight crossbreds, which averaged $58 and remained firm.

There was strong demand for young Merino ewes from Merredin-Esperance buyers at $35-$84, or an average of $55. Young wethers were keenly sought, with light weights averaging $58 and the 14-18kg cwt range lines averaging $66. Heavier types sold from $80-$110, pushed on by live export market.

In Queensland at the Warwick saleyards on Wednesday, the agents yarded 1473 lambs and hoggets, and 217 sheep.

The agents said the market was firm to a shade dearer for all descriptions of sheep and lambs in a larger yarding. The top-priced lambs weighing 58.5kg lwt made $138 for St George Vineyards Pty Ltd of St George.