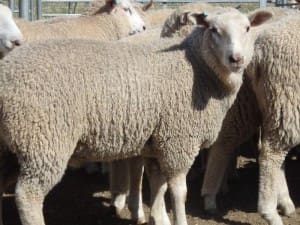 Trade lamb prices lifted in New South Wales as supplies tightened, but slipped slightly in Victoria as more were offered.

The smaller offerings of heavy young lambs helped keep prices for these generally firm to dearer. Restocker competition is still strong on light and secondary trade lambs, with lambs up to 18kg cwt making up to 650c/kg in NSW, to 633c/kg in Victoria and to 625c/kg in South Australia.

The ESDI and national indicator for mutton are both up 2 cents to 334c/kg.

In New South Wales at the Central Tablelands Livestock Exchange at Carcoar on Wednesday, the agents yarded 10,200 lambs, 3400 more than last week, and 2900 sheep, 600 more.

The NLRS said it was a mixed yarding, with a pretty good selection of trade and heavy weight lambs. Fewer extra heavy weights were yarded. There was a good supply of lighter lambs suited to feeder buyers and restockers. Most grades were $5 dearer, mainly due to the improved quality.

The NLRS said lamb quality was fair, with a large percentage of the offering young secondary drafts. The usual buyers attended, but some export processors operated sporadically across heavy categories.

Well-bred second cross store lambs were well-supplied and restockers were active over all weights. Store orders were from Albury, Cootamundra, Forbes, Dubbo, Molong, Bathurst and the local area.

There were fewer new season trade lambs and they sold to steady competition. Well-finished medium and heavy trade lambs were keenly sought by some domestic processors. The better finished lambs made from $122-$148, averaging 540c/kg cwt. Light trade lambs met with reduced competition and prices eased $3 to average $115. Secondary lambs sold up to $3 dearer due to strong local and northern competition. Well-bred second cross lambs returning to the paddock and to feed on made $90-$111. Plainer immature types averaged $69, with prices unchanged.

There was strong demand for heavy sheep, but not for light and medium weight grades and not all buyers operated. Light sheep lacked buyer support, resulting in a cheaper trend of $12, to average 269c/kg cwt. Trade sheep were well-supplied and prices eased $5-$9 to $60-$95, or 314c/kg cwt. Heavy crossbred and Merino ewes were well-supplied and prices were unchanged, averaging 284c/kg.

In Victoria at the Hamilton saleyards on Wednesday, the agents yarded 45,714 lambs, 26,752 more than last week.

The NLRS said the area’s new season lamb annual turn-off is in full swing. Quality was excellent considering the cut out of the season, with very good large drafts of heavy, medium and light trade weights of mostly 3 and 4 scores ideal for slaughter. There was a smaller percentage of light weight store type lambs.

The NLRS said an average to good quality yarding of lambs was offered to the regular buyers.

Heavy lambs sold to $142, with most around last week’s levels, though some of the lighter trade weights were a little dearer. Restockers paid mostly $71-$95.50, and from $41-$65 for lighter replacements, while most restocker lambs were dearer. Light weight 2 score lambs sold from $62-$82.

All weights and grades of sheep were yarded, including quality pens of Merino ewes and wethers and extra heavy crossbred ewes. Sheep sold to strong demand to be $5-$10 up on last week, with light and medium Merino mutton costing around 350-360c/kg cwt.

At the Hamilton sheep sale on Thursday, the agents yarded 10,499 sheep, 7546 more than last week.

In South Australia at the Mt Gambier saleyards on Wednesday, the agents yarded 9364 lambs, 3094 more than last week, and 54 sheep, 432 more.

The NLRS said a much larger field of trade and processor buyers attended. Both major supermarkets attended for the first time this spring, but not all buyers were fully active. Restockers purchased lighter weight lambs to grow on. Quality improved, with large numbers of well-presented and heavy weight new season lambs, but prices barely held firm.

The NLRS said it was a mixed quality yarding and prices were dearer after last week’s fall. Heavy weight lambs were up $10 and graziers snapped up the discounted unfinished lambs. Light weight new season lambs sold from $67-$68, trade weights made $97-$106 and heavy weights ranged from $105-$112. Lambs suitable for air freight sold from $54-$83. Store crossbred lambs sold to restockers and feeders for $23-$63, depending on weight and quality. Merino store lambs made $10-$63.

Merino ewes dominated the sheep yarding and prices remained firm to higher for heavyweight mutton. Large lines of young wethers were presented by graziers running out of stock water and these sold strongly to a top of $85. Young bare shorn Merino ewes sold to restockers for $25, while lightweights with a fleece made to $89. The best store wethers sold to $85.

Restockers and feeders paid $65-$80 for wethers, depending on quality and weight. Export wethers sold to $95. Young rams sold to $80, while the older rams only realised $5-$45.

The Warwick agents yarded 1759 lambs and hoggets, and 532 sheep on Wednesday.

In a larger yarding of both sheep and lambs, the market was firm on last week’s rates for all descriptions, with lambs selling to $140 for Tanya Dawes of ‘Barr Park’, Roma.