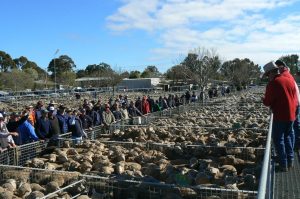 The Elders Ouyen team sold lambs before a big crowd this week.

Despite the impact of secondary old lambs on the market – with prices in some saleyards falling by as much as $12 in New South Wales and by up to $15 in Victoria — the National Livestock Reporting Service quoted the Eastern States Daily Indicators for restocker, trade and heavy lambs as moving back into positive territory.

Mutton sheep prices rose up to $20 mid-week with stronger export demand. The ESDI for mutton for mutton rose 10 cents to 397c/kg on Thursday and the national indicator also lifted 10 cents to 396c/kg.

In New South Wales at the Central Tablelands Livestock Exchange at Carcoar on Wednesday, the agents yarded 4800 lambs, 900 fewer than last week, and 1100 sheep, 1050 less.

Most the sheep were crossbred ewes, and most grades sold at similar rates to last week. The 2 score Merino ewes sold from $40-$60 and the better 3 and 4 score crossbred ewes made $73-$125.

The NLRS said lamb quality was mixed, but there were a few very good runs of new season trade weights. Old lambs slipped in quality and a fair percentage of lighter lambs and Merinos was offered.

Sheep quality was very mixed. Well-covered Merino ewes carrying a bit of wool were keenly sought after and sold from $94-$114. Heavy crossbred ewes made to $124.

At the first sheep and lamb sale at the South East Livestock Exchange at Yass on Wednesday, the agents yarded 12,000 lambs and 4000 sheep.

The NLRS said lamb quality was fair to good in the first SELX sheep and lamb sale. Only a handful of new season lambs was offered and most old lambs showed the effects of the wintery conditions and lacked finish. Merino lambs were well-supplied and most of suited light processor orders.

Sheep quality was good and most attracted strong competition. Medium weights sold from $74-$101 and heavy weight ewes $100-$135. Heavy Merino wethers with a short skin made to $135.

The NLRS said the yarding included 7750 new season lambs. Quality was mixed in the old trade categories, resulting in some bigger price variation in some classes. Not all the usual export or domestic buyers attended. There was also strong northern restocker competition for lighter weight new season lambs.

The NLRS said there was a further drop in the quality in old lambs, from average to plain, and most of the winter buyers did not operate in the subdued market. There was a limited selection of trade weight old lambs, with many of the smaller pen lots lacking finish for slaughter.

The NLRS said lamb and sheep numbers more than halved following good rainfall in the past week. There was a reasonable selection of quality young lambs, but the yarding of old season lambs was mostly very plain and in small pen lots as farmers cleared final lambs.

A couple of regular buyers were absent, but competition remained robust on the best young lambs and on mutton. Prices for young lambs averaged a few dollars cheaper, while quality dictated results for old lambs in a generally weaker market.

Prices for heavy trade weight young lambs reached a top of $162, followed by about half a dozen pens at $140-$158. Plainer young lambs with not as much weight or carcase finish, then sold from $103-$130. On a carcase basis, the lead drafts of second cross lambs suiting domestic orders made 600-630c/kg cwt. Plainer young lambs trended down to about 570c/kg. The best of the export weight old lambs sold to $151, but most of the offering was secondary. Light lambs made $60-$120.

In Western Australia in the Katanning saleyards on Wednesday, the agents yarded 2500 lambs, 29 more than last week, and 4411 sheep, 2411 more.

In Queensland at the Warwick saleyards on Wednesday, agents yarded 713 lambs and hoggets, and 134 sheep.

Prices were quoted as firm to slightly cheaper for all descriptions in the smaller rain-affected yarding of sheep and lambs. The top-priced lambs in the sale made $145 for Tara producers T.G. and M.S. Thomson of ‘Boona-Mia’.