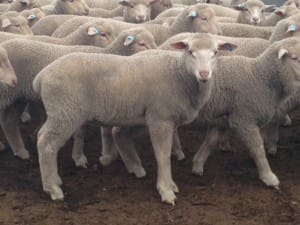 New season trade lambs in NSW saleyards sold consistently from 585-660c/kg on Friday, making less in Victoria, for a limited offering at Shepparton.

Heavy young lamb rates also firmed further to around 560-670c/kg in NSW and over 600c/kg in Victoria.

AuctionsPlus sheep and lambs numbers lifted by almost 2000 to 38,870 last week and a clearance rate of 81 percent was achieved.

Proven Merino breeders averaged $125 last week, with 4-5 year-old 67.1kg lwt September shorn Shalimar Park and Airlie blood ewes at Baradine making the top price of $138. They had been joined to Merino rams for six weeks from 29-4-15.

An offering of more than 5700 unshorn 5-6 month-old Collandra North blood Merino wether lambs from Burtundy Station at Ivanhoe averaged $75 last week, with the top 16.7kg cwt line  making $99. AuctionsPlus said these lots attracted plenty of bidding activity, with an average of eight unique bidders on each lot. Other Merino wether lambs made $46-$86 and older 2-4 year old Myuna blood wethers, 24kg cwt, were sold to a processor for 508c/kg dressed or $121.

The NLRS said the quality of the heavy lambs was good, while the light and trade grades tended to lack finish. The 5000 new season lambs were mainly trade and heavy weights. Old lambs increased in supply and the store lamb offering was limited. All the buyers operated and competition was strong, resulting in a dearer market.

The NLRS said lamb quality was mixed, with a good offering of finished lambs along with the plainer drier types. An extra buyer competed in a dearer market.

The sheep were mostly Merinos and quality was fair. Prices remained strong, with Merino ewes selling from $84-$132. Crossbred ewes made $100-$118.

The NLRS said the small and mixed winter yarding of lambs was mostly odd pen lots of old season lambs of varied breed type and condition. The supply of new season lambs was limited to 220 trade weight and lighter weight types. The usual buyers operated in a market that was similar to a week ago, with the limited numbers and plain quality making accurate price trends difficult.

The market reached a top of $175 for a small pen of heavy export weight old lambs. The best of the new season lambs sold from $148 to a top of $152.50 for heavy trades estimated at around 23kg cwt, with buyers working on slightly lower skin returns of $10-$11. The next run of young crossbred trade lambs, 20-22kg, made $132-$137. On a carcase basis the better finished slaughter lambs ranged from an estimated 600-620c/kg cwt.

The offering of old season lambs was very mixed, with a few pens of heavier trade and export types that made $140-$175. Most of the yarding comprised lambs under 22kg, which sold from $60-$120 depending on weight and quality, with some of the light weight slaughter lambs averaging dearer than a week ago.

The sheep sale featured a run of five year-old Merino ewes, recently shorn, which were offered in lines to suit restockers, but sold for processing at $100-$110 to make more than 400c/kg cwt. Heavy crossbred ewes sold from $100-$120, and trade and light weight mutton made $55-$88.