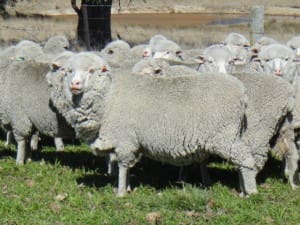 These September-shorn Westvale and Cressbrook blood ewes, scanned 100pc in lamb to White Suffolk rams, sold for $125.50 at Dundee, NSW, on AuctionsPlus yesterday.

TRADE and heavy lamb prices were overall firm in eastern states saleyards mid-week, with some improvement in restocker, Merino and light lamb rates across the country.

The trade weight and heavy new season lambs in New South Wales continued to sell at 500-659c/kg cwt, with buyers competing strongest for the lines with better skins and finish.

Old lamb prices lost ground at most centres as numbers and quality declined, and the sucker offerings increased.

The ESDI for mutton is firm on 370c/kg and the national indice closed on 369c/kg.

In New South Wales at the Central Tablelands Livestock Exchange at Carcoar on Wednesday, the agents yarded 6850 lambs, 600 more than last week, and 1450 sheep, 970 fewer.

The NLRS said there were good runs of heavy weights, some well-finished new season lines and a limited number of ideal trade weight old lambs.

The NLRS said the number of new season lambs lifted to about 7000. Old lamb numbers declined and quality was quite mixed with a limited portion of the offering shorter skinned lambs off crop or supplementary fed and well-finished. A full turn-out of domestic and export buyers attended and most companies operated.

New season heavy trade lambs were in reasonable supply and regularly made from $148-$165, with bidding strongest for quality lambs with good clean skins. Light and medium weight trade lambs made from $112-$157 to average 617c/kg cwt, with buyers operating on skin values of $10-$13. Old trade lamb quality was mixed and prices were generally unchanged to a few dollars cheaper. The better finished lambs weighing 21-24kg cwt sold from $140-$166, with heavy trade lambs averaging 617c/kg. The mixed selection of heavy and extra heavy lambs sold to the regular buyers. Lambs weighing 24-26kg sold up to $3 cheaper while extra heavy lambs sold from $166-$201.20, averaging 608c/kg.

Mutton quality was very mixed, with all weights and grades represented. More of the ewes and wethers were of medium weight, with a significant portion shorn. Merino ewe mutton sold to steady demand, with prices generally unchanged to $3 cheaper. Heavy crossbred ewes were not as keenly contested and prices eased $4, averaging 363c/kg cwt. There were fewer Merino wethers and quality was not the standard of the previous sale. Most categories carried less condition and skin value resulting in a cheaper trend of $13, to average 371c/kg cwt.

The NLRS said it was much smaller, plainer quality yarding after Sheepvention and although most of the usual winter buyers attended, not all operated.

The NLRS said fewer quality lambs were yarded. Most of the usual buyers attended, but not all operated fully.

In Queensland on Thursday, Warwick Selling Agents yarded 2201 lambs and hoggets, and 724 sheep.

The market eased for all descriptions in the larger yarding of both sheep and lambs. The top lambs in the market from Stone Family Farming from ‘Johnstone’, Dirranbandi, made $140.

The NLRS said was a larger yarding of lambs at Powranna and Killafaddy on Tuesday, with more store lambs and fewer heavy lambs as the cold season impacted.

The NLRS said it was a very mixed quality yarding. Prime new season lambs were the stand-out and sold to $120. All the usual buyers attended.