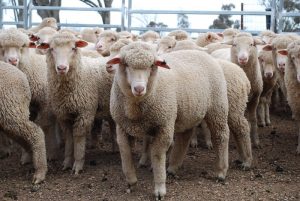 Mutton prices continued the strong mid-week trends with Merino ewes selling to $160 at Griffith and crossbred ewes making up to $145.

After Friday’s sales, the National Livestock Reporting Service’s Eastern States Daily Indicators for light, restocker and Merino lambs were slightly lower, but posted big gains for the week. The main trade and heavy slaughter lamb categories were slightly firmer, but lower for the week.

The ESDI for mutton closed the week down 1 cents to 410c/kg, giving a lift of 10 cents for the week. The national mutton indicator was quoted at 408c/kg.

The NLRS said the yarding included 7700 new season lambs and quality was fair, with good numbers of well-presented finished drafts. There were fewer old lambs, but quality was fair. There was an extra buyer active in THE firm to dearer market.

The NLRS said lamb quality was good across all new season grades. Mainly trade and heavy weights were yarded, including 5000 new season lambs. There were fewer old lambs and quality was varied. All the usual buyers operated and competition was solid, resulting in a generally firm market.

A line of 527 unjoined 2-4 year-old mid-April shorn Merino ewes, 67.5kg and mostly score 3 and 4, made $153 at Dunedoo, NSW. AuctionsPlus said prices for proven breeders were back a little this week in numbers, but still made solid prices. A line of 300 5 year-old late-July shorn Merino ewes at Wellington, NSW, made $125. The ewes weighed 47.8kg, were mostly score 2, and scanned 100 percent in lamb to White Suffolk rams to commence lambing mid-spring. The average price for this category was $111.

Merino wether lambs presented well this week, averaging $96. A line of 500 March-April drop June-shorn Pooginook blood lambs weighing 16.3kg cwt made the top price of $109. Merino hogget numbers were slightly down in comparison to lambs this week and prices averaged $81.

A line of 260 station-mated White Dorper ewe lambs made $143 from Ivanhoe, NSW, and will be heading south to the Murray River at Swan Hill, Victoria. The 4-9 month-old ewes weighed 49.2kg lwt and were mostly score 3.

The National Dorper and White Dorper Sale held by Elders and Landmark at Dubbo, NSW last week offered 218 lots comprising of White Dorper and Dorper rams as well ewes. AuctionsPlus had 165 bids over the duration of the sale and successfully purchased 11 lots online with 63 bidders and 192 guests viewing the sale.