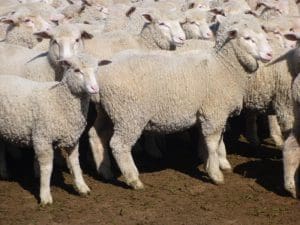 The National Livestock Reporting Service said secondary condition old lambs were heavily discounted in some saleyards and there was weaker competition among domestic processors.

In New South Wales, new season trade weight lamb prices were up to $9 lower, heavy lambs were quoted up to $15 cheaper and some extra heavy drafts at Wagga were $28 cheaper. Young and old lambs were up to $10 cheaper in Victorian saleyards.

The ESDI and national mutton indicators closed up 3 cents to 390c/kg.

In New South Wales at the Central Tablelands Livestock Exchange at Carcoar on Wednesday, the agents yarded 5700 lambs, 1400 fewer than last week, and 2150 sheep, 400 more.

The NLRS said lamb quality declined, with only some lambs in good condition and remainder tending to lack finish. There were mainly light and trade weight lambs, with a few heavy weights and new season lines. Not all buyers operated and competition was easier, resulting in a cheaper trend particularly on the old grades lacking finish.

The NLRS said the yarding included 3000 new season lambs. Old lamb quality was mixed, with most in secondary condition, resulting in some being heavily discounted. Most export and domestic buyers attended, but export demand was sporadic and not all companies operated fully. There was some restocker competition from two states operating in the market over young lamb categories.

The NLRS said lamb quality was mixed, with limited selection of all weight and grades. Not all of the small field of buyers operated.

The NLRS said the yarding included 1600 young lambs. The usual buyers attended, plus some extra competition.

The sheep yarding comprised all weights and grades, and quality was good. Sheep generally sold either side of firm with heavy shorn Merino wethers making $121. Restockers paid $84-$108 for Merino ewes, $120 for joined crossbred ewes and from $69-$90.50 for shorn Merino wethers.

In Western Australia at the Katanning saleyards on Wednesday, the agents yarded 2471 lambs, 471 more than last week, and 2000 sheep, 1214 fewer.

In Queensland at the Warwick saleyards on Wednesday, the agents yarded 2027 lambs and hoggets, and 342 sheep.

The better quality lambs sold firm and the lighter lambs were slightly cheaper. The sheep market was cheaper. The top-priced lambs made $168, for Cunnamulla producers S.C. and P. Barkla of ‘Rosscoe Downs’.