New products: Lamb bacon becoming ‘on trend’ in US

NOBODY loves their bacon more than US consumers, and now the lamb industry is looking to move-in on the segment with the release of a new lamb bacon product in the US.

Superior Farms, a major US distributor of domestically-produced lamb as well as imported lamb from Australia and New Zealand, is behind the product, which is being directed at both food service and retail users.

Beef bacon has made some inroads in US food circles over recent years, but this is the first time lamb bacon has had a presence.

Superior Farms recently earned “Best New Product” awards for its lamb bacon at the International Foodservice Show in New York and at the Western Foodservice & Hospitality Expo in Los Angeles.

Cured and hardwood smoked, Superior Farms’ lamb bacon is sold in slabs that can sliced or diced for foodservice applications. The product is made from lamb breast and is Halal certified. Lamb bacon also contains fewer calories and less fat than pork bacon, the company said. 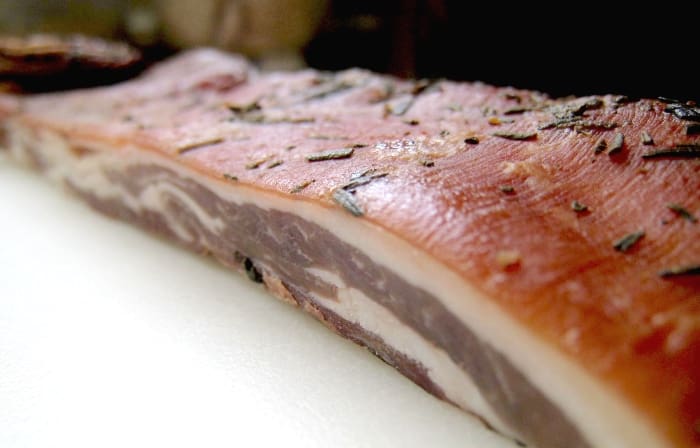 “Just about everything is better with bacon,” said Superior Farms vice president of marketing, Anders Hemphill, in typical American style.

“Whether we are talking brunch and burgers, or appetisers, pizzas or soups, lamb bacon will boost the flavour profile of menu offerings wherever it is featured. The possibilities are endless,” he said.

Superior Farms has also recorded good success with another new product – pulled lamb, which joins pulled beef, pulled pork and pulled chicken meat as one of the hot items in US food service at present.

Lamb bacon is coming onto the US foodie radar, with US food blog, Food Republic recently posting on the topic.

“The meat from the loin or breast of the lamb gets made into bacon, though you may see it called fatback, belly or saddle,” it said.

“If it comes from the saddle it’s off the less-fatty loin area, whereas belly bacon comes from the fatty underside and proves unctuous and rich (like pork belly). The taste of the meat offers a deeper, darker flavour that lends itself to Moroccan and Indian spices like cumin, coriander, turmeric, cinnamon and black pepper,” Food Republic said.

“You could say lamb bacon has a bit of mystery to it, making it special and unforgettable on first bite. Lamb belly is the most ‘lamby’ part of the whole animal, and the bacon has a very intense flavour. It gives a dish a very unique gaminess you can’t get from another meat,” said Paul Reilly of Denver restaurant, beast + bottle.

“A pork belly is so much thicker than a lamb’s, and lamb bacon really has a much funkier, gamier flavour than pork bacon,” he said.

Even those who aren’t fans of lamb meat would likely get behind the new bacon cut, as the fat works to ease up the meat’s signature earthiness, he said. “That’s why you’ll find it popping up in butcher shops and elevated eateries across the country.”