A new integrity assurance scheme for all high quality Australian Merino wool that recognises fibre traceability with good animal and environmental management has been launched.

New England Wool’s SustainaWOOL™ Integrity Scheme is designed for use by current and future suppliers of wool to its Italian clients – which include the high profile fabric makers and shareholders of New England Wool, Reda and Vitale Barberis Canonico.

As the world’s largest purchaser of highest quality “spinner” style superfine wool, NEW managing director Andrew Blanch said he and New England Wool’s Italian shareholders want the wool-consuming-world to understand that their wool suppliers/producers take the utmost care with their animals and the environment.

“We are very supportive of those who use pain relief if you have to continue mulesing.

“So that is one of the main provisos in this scheme, that you can’t be accredited unless you at least use pain relief.”

“Wool from sheep that are mulesed without pain-relief would not be able to be sold under the SustainaWOOL brand”, Mr Blanch said.

Mr Blanch said New England Wool supports the continuation of research into non-invasive methods of flystrike prevention and the cessation of mulesing by those growers in areas where it is possible to do so.

“It has become increasingly clear however, that at this particular time the use of a registered pain relief product is the very best welfare outcome for the animal.

“In 2010 New England Wool initiated the concept of using a higher price in the auction room on wools that come from non-mulesed sheep (NM),” he said.

“In 2014, New England Wool added “Pain Relief (PR)” to this initiative, and will use a price higher than our normal prices in the auction room for wools declared to come from sheep which have had a pain relief product applied.

“It must be emphasized that the quality of the wool purchased by New England Wool will not be compromised,” Mr Blanch said.

“The “premium” for NM (non-mulesed) and PR (pain-relief) wool will only be applied to wool that conforms, first and foremost, to the high quality standards set by our shareholder customers. 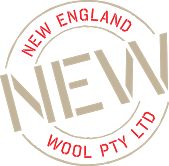 Mr Blanch said NEW’s 15-19 micron Contracts delivered throughout 2014/15 have been based on prices 12-25 percent above the market at times.

“Probably that has been eroded a little bit over the past two weeks, which is great, but in general most people who have delivered Contract wool into our better types would be at least 10-12pc better off at the time of delivery.

“If they go into our spinner types, (our best types) they have received up to 25pc more.”

Many of NEW’s current wool suppliers were already producing SustainaWOOL quality wool and contracted wool would need to meet the scheme’s standards. The SustainaWOOL grower’s checklist reviews the health, welfare and management conditions under which sheep are run, and wool is produced and harvested.

The SustainaWOOL criteria also includes use of the AWEX National Wool Declaration that gives information on the status of chemical use and flystrike prevention strategies on a farm.

“Certainly of the top 150 clips that we buy every year, maybe 100-120 will be able to cover all those (SustainaWOOL) bases,” Mr Blanch said.

New England Wool buys around 40,000 bales of wool a year and Mr Blanch would like to think it could all be accredited as SustainaWOOL.

“But if we can get over 70pc in the next couple of years and work up from there that would be wonderful.

“Everyone can be declared and accredited and we may start to use that as a preferential buying system in the future.”

Mr Blanch said a lot of those things are covered by government acts anyway, including chemical storage and handling, animal welfare and environmental things.

“The Traceability section of the document is very important, going pretty well right back to the sheep the wool came from.

“It is basic stuff that has never really been written down in one place as a pretty concise document as to what happens on that farm,” he said.

“We are providing our clients with a paper trail with a story with it that can help them to sell their product”.

“It’s a moveable document, if things change here or overseas, the document may change as well.”

“In a general sense, the basic philosophy is to promote the production of the highest quality wool via the sustainable management of natural and physical resources.”

Mr Blanch said the wool consumer is increasingly demanding a higher level of traceability along the pipeline of the production system from which they buy.

“Not only does the product need to be of the highest quality, there also needs to be a compelling story behind the product clearly showing the highest level of environmental and social sustainability and animal welfare.”

Mr Blanch said New England Wool understood it had a major role in promoting the highly professional and ethical wool production systems of its suppliers. It also had the important role of advising potential suppliers of areas that could be improved or enhanced in certain production systems.

“The SustainaWOOL™ Integrity Scheme is a tool which we want to share with our valued suppliers to help us work and grow together in an increasingly competitive landscape.

“New England Wool wants its suppliers to stand out from the crowd – in the very best way,” he said.